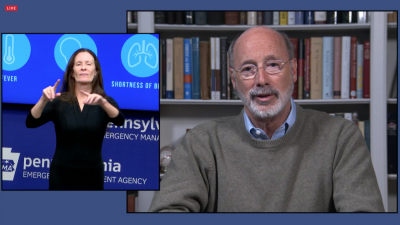 During the Governor's live stream, Secretary Rachel Levine began the report (initially with technical difficulties and missing audio), stating that 165 new cases were reported today, with 108 reported yesterday. So far, 644 Pennsylvanians have been officially diagnosed with COVID-19 across 34 counties, including Erie. While 6,595 patients in the Commonwealth have tested negative, and tragically, six have died.

"We will not come out of this unscathed," Wolf said in his opening remarks, explaining that "we must act as soon as possible and we must act decisively."

Pennsylvania's Pittsburgh's Allegheny County, the Philadelphia area's Bucks, Chester, Delaware, and Montgomery Counties, and northeast PA's Monroe County have a stay-at-home order issued for two weeks. These are the counties with the greatest number of cases and the likeliest possibility for community spread. Erie County was not one of those listed for the stay-at-home order.

"I two have loved ones I want to be with," telling about his recently born grandchild, and his inability to see her in person.

He spoke of Pennsylvania's long history of freedom, citing that "It's this freedom I wish to preserve" during this crisis.

When discussing possible policing of the stay-at-home order, Wolf confirmed that "our National Gaurd will be used in health care initiatives, not in stay-home enforcement." Despite mistaken reports, he reiterated that "there is no curfew."

"Before we can recover, we must survive," he said, calmly. "We have to act as if we have it," rather than acting like it will be spread by us and not to us.

"I do not want to overreact," Wolf reasoned. When questioned by PennLive as to why there was not a statewide order, he stated that "that's why I'm focusing on those counties and those counties alone."

"The hope is that we do a good job here and keep the Coronavirus from spreading to the rest of the state."

Note: This article has been updated.