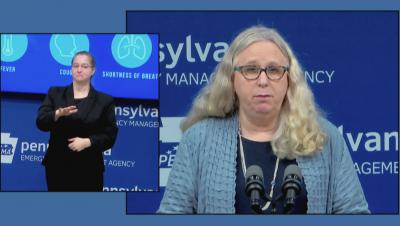 With nearly 1,000 new cases today, Pennsylvania Governor Tom Wolf said that "it's filling up every corner of our state."

On Tuesday, April 1, Wolf extended the stay-at-home order across the state, to every single county in the Commonwealth. Previously these orders came as a county by county basis, with Erie enacting one on March 24.

Wolf cited people like PA Attorney General Josh Shapiro, who instated a ban on evictions during this crisis. He spoke about volunteers, teachers, and healthcare professionals hard at work helping to meet the needs of citizens statewide.

PA Secretary of Health Rachel Levine gave new updates, citing that as of 12 a.m., there were 962 new cases, with 5,805 testing positive in 60 of PA's 67 counties. 286 of these cases were in healthcare workers, and 200 in nursing homes, numbering 92 in the state. Approximately 10% of those who have tested positive had required hospitalization. There have been 74 deaths (all in adults) so far in Pennsylvania.

"Staying at home is the only way that we can slow the spread of COVID-19 through our communities and through our commonwealth," Levine stated. "Stay calm. stay home. stay safe," she repeated.

When questioned about enforcement, Wolf noted that "at this point, we're focusing state police efforts on business closures." He recognized the Pennsylvanians had for the most part been self-regulating themselves effectively.

Since March 15, there have been close to 1 million unemployment claims in Pennsylvania. Wolf reassured claimants that they are doing their best processing this huge spike in claims.

As per a question about continued liquor store closures, Wolf pointed out the ability to order online (though websites are were currently overwhelmed).