Gravity & Other Myths Brings Audiences Extremely Close to the Action

Gravity & Other Myths will take theatergoers to another level with its performance. 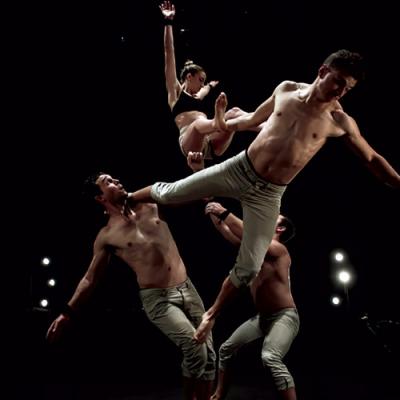 The experience of attending a live theater performance is so much more intimate and immediate than watching actors on a movie or television screen. Australian ensemble Gravity & Other Myths (GOM) will take theatergoers at Mercyhurst University's Mary D'Angelo Performing Arts Center to another level with its performance.

See the actors struggle, move into the poses with ease and emotional work, and "see the personal narratives of the performers come naturally alive."

Talk about raw theater: The show, which has appeared at the Edinburgh Fringe Festival and other international locations, will bring the audience directly into the arena. The set is stripped down, sans lighting and other illusory elements. Actors are acrobats and wear minimal costumes and makeup. The audience can hear, see, smell, and almost touch the actors; there is no "fourth wall" in place. At this performance, attendees will see the actors struggle, move into the poses with ease and emotional work, and will see "the personal narratives of the performers come naturally alive."

GOM formed in Adelaide, South Australia in 2009. The ensemble aim to present honest, open performances that are more like acrobatic physical theater than traditional circus or theater performances typically onstage or in the round. The group create, direct, and perform all their own work, and will provide a personal and evocative performance right here in Erie. – Miriam Lamey