Great Brews and Views Define Beer on the Bay

If you are a craft beer connoisseur, there's an event coming for you. 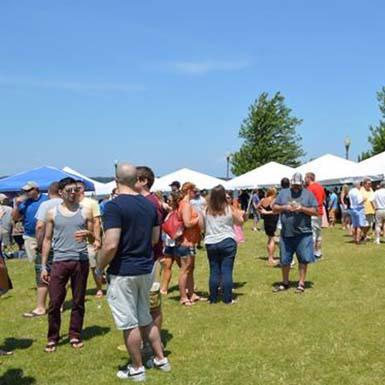 If you are a craft beer connoisseur, there's an event coming for you. The eighth annual Beer on the Bay will take place on Lawrence Pier, better known to Erieites as the lawn of the Amphit heater at Liberty Park.

Beer on the Bay is the region's largest and most popular craft beer festival, featuring over 50 local and regional brewers.

Beer on the Bay is the region's largest and most popular craft beer festival, featuring over 50 brewers. Among these is a wealth of locally-based breweries, plus others popular throughout the Erie region.

Whether you're a craft beer fanatic or not, Beer on the Bay gives everyone the opportunity to try something new. A few of the participating brewers this year include Erie Ale Works, Lavery Brewing Company, Ommegang Brewery, Rogue Ales, Southern Tier Brewing Company, Timbercreek Tap and Table, and Voodoo Brewery. Among vendors is one of Erie's favorite food trucks, The Que Abides. A portion of this year's proceeds will be donated to the A.N.N.A. Shelter.

The event is split into two sessions, the first lasting from noon until 3 p.m. and the second from 4 until 7 p.m. Entertainment will be provided by Meadville's The Grayhounds during both sessions. Tickets are still available and cost $35 in advance and $40 the day of the festival. For an additional $15 you can buy a VIP pass which gives you access to special brewer tents and food vendors that will not be available to general admission guests. There will also be accommodations for your designated driver: The $20 DD ticket includes access to the designated driver tent which provides non-alcoholic beverages and snacks.

After volunteering at last year's festival, I can tell you firsthand that it was a wonderful time! If you're 21 or older and want to enjoy a day near the water, you won't want to miss Beer on the Bay. A full list of brewers, vendors, and sponsors can be found at the website below. – Bridget Fessler