A transcendent, emotional rampage that proves to be a masterpiece

by Nick Warren
View ProfileTwitterInstagramRSS Feed
November 6, 2019 at 9:15 AM 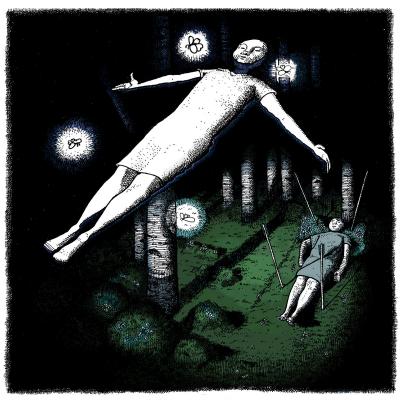 An absolute triumph, Great Grandpa's sophomore record is transcendent. Following the release of their 2017 debut Plastic Cough, the Seattle quintet garnered comparisons to the likes of Hop Along or Charly Bliss. In Four of Arrows, though, the band rises to a new, higher level. It's a potent combination of eclectic instrumentation and musicality, passionate articulation, and memorable pop sentimentality. Singer Alex Menne has a voice wonderfully reminiscent of Maura Weaver of Mixtapes, a welcome sound marked by pulled breaths and vocals on the edge of breaking. The group singalong opening moments of "Dark Green Water" hook the listener, its pop-punk building blocks flirting with darker shoegaze tones, as "Digger" and its key shifts play with a dramatic sense of tension. After the piano interlude of "Endling," the listener is queued up for "Rosalie," a true tour-de-force in less than three minutes. It's a tone-hopping work, almost rhapsodic in nature, and the listener is effectively wrecked emotionally by its second act in one of the best tracks (and albums) I've heard in years.