How Ashley Pastore has made repurposing an art 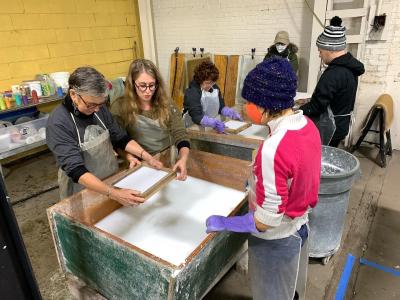 The first time I met Ashley Pastore, creator and owner of Grounded Print Shop — a printmaking, papermaking, and artist residency space — was in March of 2020. Yes, that March of 2020. My daughter had taken it upon herself to spearhead a paper recycling program in her 2nd grade classroom. She brought in her own recycling bin, and for a while we were just putting the classes' paper in with our own weekly recycling. But then I learned about Grounded Print Shop, and Ashley Pastore, and how she turns discarded paper products into recycled, handmade art and paper in her shop. I thought about how beneficial it would be for my daughter to actually see recycling in action. It so happens that the day we delivered that first load of paper for recycling was my daughter's last day of normal school for a long time. There was an incredible, theatrically strong wind blowing in swirls and gusts as we met Pastore outside of her original shop to pass off that bag of paper. The wind amplified the shared surreal, apocalyptic feeling of anxiety and disbelief and confusion that everyone was feeling at that time.

That time marked a change for literally everyone in the world, but it was also the start of a shift in the future of Grounded Print Shop. When Grounded began in 2018, it was located in a rented warehouse space at 15th and Cherry, and Pastore was working in collaboration with another artist to get their vision off the ground: to create a place where artists could collaborate, discuss, and create their art. But challenge after challenge threatened Pastore's vision for Grounded: her partner left the project, the pandemic squashed the momentum she gained on group classes and workshops, and amidst all this, the lease on her rented workspace was canceled by the property owner. If Pastore wanted to continue to do her own work, have a place for all of her large scale print and paper making equipment, as well as continue to work toward her vision of creating an artist residency space, she needed a creative solution and a permanent location.

When Pastore began looking at sites to start over, she considered potential properties the same way she views her art: "I don't like starting with things that are brand new. A brand new sheet of paper is really hard for me to deal with. When I make my art, I use found or secondhand materials because it already has some kind of history in it. I don't always know what that history is but I feel it; like a backstory that gives the piece depth." Ultimately, that feeling of depth and history made its way into the decision to purchase the current space at 1902 Cherry St. and begin to transform the mishmash of buildings, all with their own history, into the new Grounded Print Shop.

The buildings comprising Pastore's new property tell the story of their own history as well as the evolution of the neighborhood. The original building on the site is a barn that was built before 1870, which is rare to survive in such an urban area. Originally, the land at the southwest corner of 19th and Cherry contained a house with this barn behind it. One of the earliest owners of this property was a man named Philip W. Hoffman. Philip was born in 1813 in Bavaria, Germany and came to Pennsylvania in 1845. His family lived in this frame house with a barn at 609 W. 19th St. from about 1863, and owned that property up until Philip's death in 1887. Hoffman's business was in moving houses. Not moving the contents of houses, but moving literal houses, which was a more common practice in the past than it is today. Given the cost of labor and the expense of new materials, reusing and moving a house was often a more affordable option. Hoffman was in the house-moving business well before the widespread availability of the internal combustion engine, so likely the barn on the property was used to hold massive equipment, a herd of horses or oxen, and the equipment for their care. And this barn still stands as the far western portion of Grounded Print Shop.

"The core is about reuse. I'm all about reuse." Pastore's art as well as her choice of buildings reflects this value. And Grounded Print Shop isn't the first reuse of the property at 1902 Cherry St. It began as a barn, but then, with the construction of the Nickel Plate Railroad along 19th Street in 1882, the property became more desirable as a connection to that transportation line. The Nickel Plate Road was an important rail development that connected the Great Lakes from Cleveland to Buffalo and Chicago, and Erie was an important connection point. The rail line carried freight, but it was mostly used in a passenger capacity and was an extremely popular transportation method for taking day trips from Erie to Cleveland and Buffalo. The rail was in constant use up until the construction of I-90 in the 1950s, which made short passenger rail travel nearly obsolete.

The Hoffman house and barn was sold in 1887, the house was demolished shortly thereafter, and by the 1920s, the barn on the property was being reused. Its first major addition happened at the hands of lumber baron F.W. Burnham, who used the railroad along 19th Street to his advantage, having mills and yards established at Raspberry and Cherry Streets. It was also around this time that Charles "Chas" Fry established his construction and concrete business along the Cherry Street side of the property and built the existing office building there (which is also a part of Grounded, and is used as private studio space).

When walking through Grounded Print Shop now, you can see the visible "seams" in the brick that indicate renovations, changes and additions that have happened over the years. The barn portion is very obviously the oldest part, with an original stone foundation slap-dashedly repaired with pieces of brick over the years, the towering barnwood walls, creaking stairs, hay loft, and exposed rafter beams. An early expansion on the barn's second floor provides a massive amount of raw space that Pastore hopes, with the help of her cousin, woodworker Ryan Zimmerman, to transform into a woodworking shop. Below the barn's second floor, the building is more recognizably an industrial warehouse space. Pastore has worked hard to convert this open warehouse portion of the building into a working art studio, while allowing the original space of the building to remain recognizable as a part of Erie's industrial history. "I love imagining what happened in a place before I was there. And I love the idea of reinventing what this was."

In this spirit, Pastore is excited that Erie Arts and Culture has chosen to partner with her to provide dedicated studio space for their Visiting Artist in Residence Program, which is a rotating program that brings artists from all across the country to stay and work in Erie for a period of time. Director of Erie Arts and Culture Patrick Fisher commented on the importance of spaces like Grounded: "Erie Arts & Culture looked to Grounded as a partner in our visiting artist residency program when the program launched in 2020. Having Grounded as a partner helps promote cross-pollination between our visiting artists and members of our community. Visiting artists are able to arrive in Erie and be welcomed into a studio space that is equipped to provide them with time and space to explore new ideas, try new processes, and take some calculated risks. It also allows for studio visits and collaborations with Erie-based artists, art educators, or creative and cultural professionals. By having partners like Grounded, we've seen relationships established that don't end simply because an artist exits our community."

So what does the present and future hold for the new Grounded Print Shop? Not only is major work ongoing to make some primitive areas of the shop more usable, but a lot of work has already been completed in the main studio area of the building. Pastore has equipment available for artists to use in the studio space including everything necessary for paper-making, including a five pound Hollander Beater (a machine used to produce paper pulp), three different letterpress machines, two etching machines that can accomplish etching, monoprint, woodblock, and linoleum block printing as well as a Risograph machine. She is also using the building as a music venue. She has installed 26 raised garden beds on the grounds for a community garden. She has hosted open houses to provide demonstrations of the equipment, and will soon be resuming classes for children and adults alike, to teach the basics of papermaking, bookbinding, and printmaking.

After a very stressful time, scrambling to keep her vision for Grounded Print Shop alive, Pastore has landed on solid ground and feels positive and excited about the opportunities she can provide to Erie. In her mission statement, Pastore writes: "Our side lot can be likened to the city we reside in; turning a new leaf, creating something new, while acknowledging its roots. We like to think this is fertile ground begging to be planted." As Erie turns it's new leaf, Pastore is excited to provide a place that will nudge this change forward.