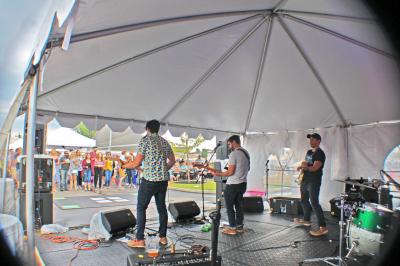 Roar on the Shore organizers announced that the annual summer festival would be heard from a more distant shore when they announced the event had moved its location headquarters from Downtown Erie to Lake Erie Speedway near North East.

But while the Erie community argued over whether this move was for better or worse, the organizers behind 2019's Gears and Grub saw an opportunity and grabbed it.

"The trucks had received an email that VCG Properties would no longer be able to hold Gears and Grub on February 10…From that point we began looking for the right venue to hold an event during ROTS," explained Alison Green, co-organizer of Gears and Grub and coordinator of The Erie Food Truck Alliance.

"While we had a few different options pop up, nothing had yet felt right and fallen into place; when I happened to be scrolling through Facebook I saw that ROTS had announced they were moving to North East," she continued. "On an impulse, I called Dave Rocco [of City Hall] and inquired about possibly holding a Gears-like event in the now available Perry Square. I got a 'probably,' and by Monday we had the green light from the city."

Along with Keith Groff, owner of Brooklyn Pizza and the Sticks & Bricks and Angry Chicken food trucks, and Nichole Young, who manages the three aforementioned entities, Green is leading the fourth incarnation of Gears and Grub to its new home in the heart of downtown.

Location isn't all that has changed; this will actually be Green, Groff, and Young's first go at putting on what looks to be one of the larger festivals of the summer.

"Chris Greene, Chris Conrad, and Emily Smicker [formerly of VCG Properties] created an amazing event in Gears and Grub. When it came to the WEP [West Erie Plaza], everything was there. They hardwired electric in the parking lot for the trucks, there was space for not only the event but parking for the event attendees," Green enthused, before commenting: "Moving downtown we basically had to start from scratch."

"Starting from scratch" sounds like an even more monumental task when you consider all the various threads that are being woven together to create one enormous tapestry of an event (though Green was quick to highlight some of their generous sponsors who helped make everything possible, including Sam Catania Painting and Gannon University).

Aside from the 21 food vendors — encompassing both trucks and concession stands — there will be live local music all three days (from bands like Small Town Revolution, First to Eleven, and The Dock Boys), five Lake Erie Ale Trail breweries on hand, cider and wine, bouncy houses for the kids, midway games, free activities from Archery Encounters, the second annual Miss Gem City Pin-up contest, and naturally, a plethora of local vendors selling their wares (like The BOX Streetware). Proceeds from Gears and Grub will benefit both the ANNA Shelter and Hope Rescue, with supplies donations accepted on-site — plus the chance to interact with some adorable, adoptable fur-babies and possibly some horses, too.

"The event has definitely grown this year," Green said. "Basically, we are hoping to feature a bit of everything that makes Erie great."

The sense of community that events like Gears and Grub fosters among both the locals to Erie and the bikers who come to visit our shores is evident as Green went on to mention a variety of other events occurring during the same time period, including Green Township's Whisper in the Country, Waterford Days, and Harley Davidson of Erie's Bike Week.

There is a specialness to Gears and Grub, though, and there always has been. This year's happening, however, is particularly unique, juxtaposing the familiar against the new. If you have been to Gears and Grub before, you'll find yourself similarly delighted by the weekend's offerings and impressed by its growth; if you've never been, it's the perfect opportunity to stop out and partake in an event which has been built on the strong organizational foundations of years previous, and which continues to get bigger and better each summer. — Cara Suppa