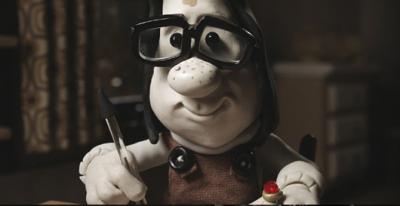 In a year that wasn't all too shabby for animated feature films—"Up," "Coraline," and "Cloudy with a Chance of Meatballs"—a semi-sweet yet dark comedy celebrates simplicity in storytelling and characterization. And while "Mary and Max" hit theaters nearly two years to date, the Guelcher Film Series at Mercyhurt College breathes new life into the film with two screenings Wednesday, April 6.

Over the course of an hour and a half, the friendship of two unlikely pen pals, Mary—a lonely young Australian girl living in the suburbs of Melbourne looking for answers—and Max—an obese New Yorker who suffers from anxiety attacks but has a penchant for solving problems—spans two decades. Interrupted by stays in mental hospitals, deaths of family members, weddings, and book publishings, Mary and Max's friendship soldiers on through misunderstandings and is punctuated by one of our most basic desires: to have a friend.

The title characters' friendship blossoms out of pure accident. Mary, a curious young girl with a birthmark of an unfortunate color, wants to know where American babies come from. She guesses, based on Americans' heavy cola consumption, that they are found at the bottoms of soda cans. Her uncle's having told her that Australian babies are found at the bottom of beer glasses may also have something to do with her assumption. But it's her curiosity that leads her to rip a name out of a phonebook as her alcoholic and despondent mother rushes her out of the post office and write to Max Jerry Horowitz. So Mary (the young voiced by Bethany Whitmore and the older voiced by Toni Collette) sends her question and a chocolate bar, looking for an answer and maybe even a friend.

Max, old who attends over-eaters anonymous where he fights the fact that chocolate is not a food group, lives alone—except for his rubber figurines, a revolving door of pet goldfish named Henry, and an invisible friend named Mr. Ravioli, who, since Max's therapist says he doesn't need him any more, sits in the corner and reads self-help books. Voiced by Philip Seymour Hoffman, the 44-year old Max has three goals for himself in life, and once he calms down from the anxiety attack Mary's letter causes, he decides to continue the correspondence since having a real friend is number one on that list. Plus, for Max, having someone send a chocolate bar isn't half bad either.

From the narrator's (Barry Humphries)description of Mary's eyes as mud-puddle brown to Max's frank explanation that a Frisbee is a boomerang that doesn't come back, "Mary and Max" delivers small comedic punches to ease the pain of watching two awkward people suffering from disconnect form a friendship...


Grab a FREE copy at one of our distribution points to read the rest of the article.