On the band?s second studio release the band seems to have more passion and fire than they?ve ever had before. It?s quite simply a fabulous album, start to finish. 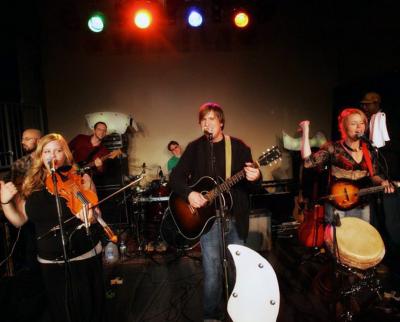 Not to get all Billy Graham on you, but Jamestown's Big Leg Emma couldn't have picked a better title for their new album than "Revival." On the band's second studio release—fourth overall—the band seems to have more passion and fire than they've ever had before. It's quite simply a fabulous album, start to finish.

Though they're in the midst of celebrating their 10th anniversary as a band, long-time listeners remember that between 2008 and 2010, there was no Big Leg Emma. Tired of the road and burned out with the band's direction, they essentially split into two camps. Primary songwriter Steve Johnson, fiddler Amanda Barton, and then-keyboardist Steve Davis formed the Steve Johnson Band while multi-instrumentalist/singer/writer Charity Nuse and drummer Rad Akers formed Charity Nuse and the Drive.

Maybe the time apart refocused their energies as a unit. Or maybe it was just serendipity. Whatever, "Revival" lives up to its name. The band's hallmark sound still centers quite a bit around Johnson's spiritual lyrics and the signature harmonies of Barton and Nuse. The three actual "new" songs on the album all prominently display these. On the opening track "Back to New York," the harmonies frame Johnson's lyrics wonderfully. "Take me back to my home, where my children play, they're out of harm's way, where they don't do anything to you," he sings. While on "The 2 of Us," he reflects that, "Everybody needs some time for reflection, some peace of mind and a new direction." A direction the band is certainly following.

But even though it's a "new" album, nearly half of it features songs written and performed during the band's 2004-2005 period. Big Leg's refocused energies really add punch to these older numbers, especially the fiery "Prophecy" and the country-ish ballads "Rock A Bye" and "Salvation Cry." And while Johnson may be the primary songwriter, Nuse also really shines on this album. From the upbeat rocker "Rain's Gonna Fall" to the Americana-inspired "The Kettle" on through, she's also playing for keeps. "It's All Brand New" is an album highlight, with Nuse inviting all to "Live in love, live in the light."

Another big creative boost is the return of former lead guitarist/writer/singer Kev Rowe to the band. His understated but fiery style adds a missing dynamic that complements Barton's fiddle playing perfectly. Rowe also brings his own longtime audience favorite, the Paul Simon-esque "Sing to Me" to the album.

In closing, it's of note that some bands don't even last 10 years. Some fold and never regain their spark. And some, like Big Leg Emma, find that something that enables them to boldly seek and find a higher purpose creatively and musically and share that purpose with their listeners. In the album's closing "Like a Memory," Johnson writes, "I'm speaking the words of love, so we can live as one." Hallelujah—with "Revival," Big Leg Emma is revived.