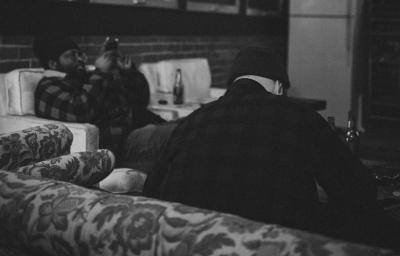 Contributed Photo
Avery (James Myles, left) and B. Gilly will be among those to perform during Gumbo Sound II at 10/20 Collective on Saturday, Feb. 26. The event is an effort to bring together and promote the eclectic tri-state music scene.

First make the roux, then add the holy trinity (celery, bell peppers, and onions), stir in the meats and seafood, and finally top it off with the broth. Most importantly, a dash of spice makes it all sound right. The 10/20 Collective presents the second edition of Gumbo Sound that'll be sure to make you work up a sweat.

"With this set I wanted to create more of a party, turn-up type of atmosphere," explains local producer, lyricist, and all-around idea creator Elias, If Only. Since becoming involved in the 10/20 Collective, Elias has continued to expand his expertise in the music industry following the creation of his podcast Lake Erie Gumbo and past musical ventures. By having the opportunity to utilize this state-of-the-art, collectively creative environment, he and the rest of his squad are not only able to explore their own growth, but also bring together and promote the eclectic tri-state music scene.

The initial Gumbo Sound took place last October and brought together a showcase of artists that included Avery (James Myles), B. Gilly, and Sean Harris. The event can be viewed as "more of a conference rather than a show," as it not only gives Erie the opportunity to check out new and up-and-coming artists, but more importantly gives artists the chance to network and build strong business relationships.

In this second serving of Gumbo Sound, Crew Life Productions will be performing for the first time since the release of multiple compilations and collaborations amongst the crew with a first-of-its-kind surprise during their performance. Also, there will be Ayam JC from Buffalo, Faaathom from Pittsburgh, B. Gilly from Ohio, and Erie's own BREEZ0LAND DC and YUNG9INEDRO. "It's such a different variety of people performing but we are all close in the creative community. Although we can sometimes get viewed as secondary cities, we have just as much talent as Atlanta or NYC," protests B. Gilly.

Artists will be selling merchandise with local breweries and distilleries also participating. This showcase will be the second of many, as Elias plans on making this a monthly affair with each set displaying different artists and genres. Dive into this melting pot of the incredibly talented Erie creative community that we are a part of by putting our city on and sharing the love.