Hair and History with Uncle Nick

More than just a shave and a haircut. 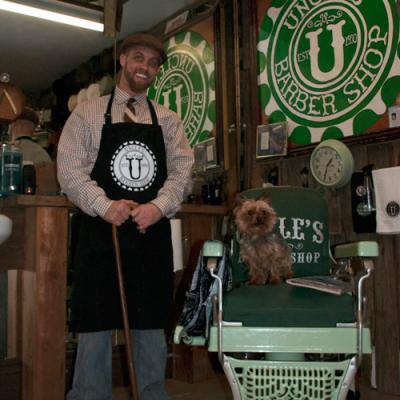 There is a long section of Peach Street that is Erie's equivalent of "fly-over country," a stretch that runs from 38th Street down to the Railroad overpass near the Brewerie. North is downtown and Erie's cultural district; south are car dealerships, the Mall, and the overwhelming glitzy hoopla of corporate American retail. In between are the Blood Bank, a fire hall, Central Tech High School, and even some residential homes – not much that could be considered a destination. With the amount of traffic that flows past, middle Peach Street could be a mecca for local specialty stores. Places like Grasshopper have shown that it is possible to survive there if you find the right niche.

Nicholas Senita (otherwise known as "Uncle Nick") is doing his part to add to the relevance of the neighborhood. Uncle Nick's Barbershop is one of the most interesting places to look at in Erie, with handcrafted signage, a working barber pole, a photographic mural, and a garden in the back. The outside of the establishment is interesting, no doubt, but the inside is where you want to be if you want visual stimulation. Paneled with antique barn wood, the barbershop's walls display a collection of fedoras, neon signs, a guitar case with a unique history, a unicycle, and cases of antique barbering tools and shaving mugs, as well as memorabilia from Uncle Nick's many adventures.

And therein lies the real reason to visit Uncle Nick's Barber Shop: Uncle Nick. Nick believes that he has barbering in his blood. He says, "Barbers are not created, they are born." Like all good barbers, Nick has the gift of gab. If you show the slightest interest in anything in the shop, he will regale you with its history. He has an encyclopedic knowledge of tonsure antiquity while his tales of his travels with the band Slightly Stoopid as their tour barber make for fascinating stories. He's genuinely interested in everyone he meets and will tease from you the information he feels his trade requires him to know – facts about your career, your family, your taste in beverages. As a barber, Nick needs to know about you. A barber offers as intimate a service as any professional – save your family doctor – and Nick has always prided himself on being a "personal barber." 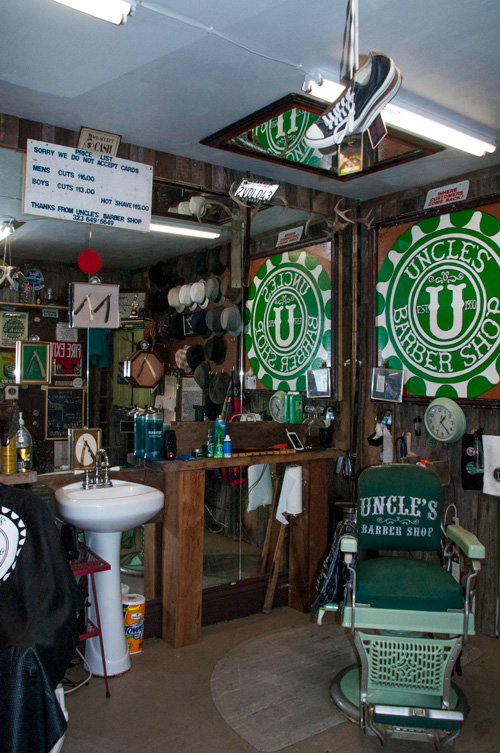 Barbers, you see, have been and still are part of the glue that holds the community together. In the past, the barbershop was the place where a man would go to learn the news, where businessmen made deals happen, where men went to be men around other men. Uncle Nick respects this tradition and is endeavoring to keep it alive. His shop includes a back smoking lounge where those who enjoy a good cigar are welcome to sit and converse. Topics deliberated in a barbershop are wide-ranging and often contentious: sports, politics, relationships, music… Traditionally debates are frequent and friendly – and that is half the fun. There is a certain freedom in discussing issues in a traditional barbershop – especially over a good smoke – that makes it seem easy to solve the world's problems. Uncle Nick says that bringing a cigar and a beer with you for your haircut is fine (even encouraged), but he hopes that most of the smoking lounge hijinks happen Wednesday evenings to keep the atmosphere kid-friendly the other days.

According to Uncle Nick, a barber could be judged in the old days by how many shaving mugs he had on the wall. Each customer of any means would have his own mug on the shelf. The more mugs, the more regulars the barber had. Having your mug displayed was not just a nod to the barber, but an advertisement for the client as well. Each mug would have the patron's profession represented pictorially upon it along with their name. If one of the customers happened to be a lawyer who needed to hire a plumber, or vice versa, the barber knew just whom to recommend. Thus was the community built at the barber shop. 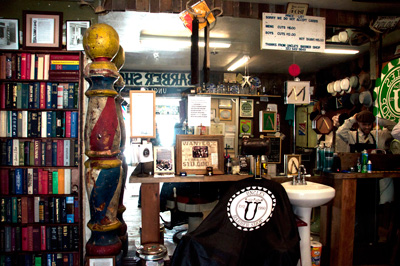 The ancient art of barbering is a fascinating chronicle. Hair, traditionally, has spiritual power. Those who have been in charge of cutting it have been the shamans of their cultures – entrusted with the spiritual and often physical health of those in their town or village. In many parts of the world, not only do these traditions live on, but the traditional way of cutting hair lives on with it. After all, a quarter of the world's population lacks electricity, so no hair-straighteners, blow-dryers, or motorized clippers for them – just strictly old-school methods and tools. Check out Uncle Nick's collection of antique barber tools, including straight razors, sharpened flints, and a jagged clam shell (I'm not going to tell you what that was for, it's too painful to think about. Ask Uncle Nick when you see him).

During the Middle Ages in Europe, the most educated people were monks, so they should have been in charge of all the doctoring. But surgery was off limits to them: the human body being a temple that was not to be defaced by cutting into it. Often, the only other educated person in town who had any knowledge of anatomy was the barber, so it fell upon him to remove tumors, release evil spirits through holes drilled in the skull, and of course, bleeding the sick to restore the balance of bodily "humors." Traditionally, the red and white barber pole harkens back to the days when blood-stained rags were hung on poles outside the shop to advertise that medical services were available within.

Uncle Nick offers no such surgical services, of course. He is a man rooted firmly in the present. 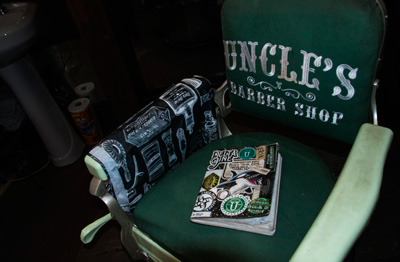 His ties to popular culture run deep since his home base was Southern California for several years where he immersed himself in all things cool. He went on tour with alt-rockers 311 and Slightly Stoopid as their personal barber in 2012. He played a referee in the Adam Sandler football movie The Longest Yard, meaning he got to hang out with Sandler, Terry Crews, and Burt Reynolds on set. Make sure you visit the bathroom while at the shop to see all the pictures, posters, and ticket stubs from his adventures adorning the walls, as well as the game ball from the movie.

When you visit Uncle's Barber Shop, after you get the tour and a few stories, Uncle Nick will give you a shave and a haircut. You will feel connected to the past and help solve the problems of the future. If you so desire, Uncle Nick will style your hair with some of his own patented pomade as he tells you one more story. His feisty little dog Charlie will ruff his approval and then escort you to the door.