Kurt Vile released his fourth album earlier this year, and Ted Hoag tells us why it's a good summertime listen. Give Ted's review a read. And then go give Kurt a listen. 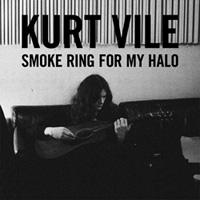 Vile is by far the most undermining word to describe Kurt Vile's sound on his fourth EP release, "Smoke Ring for My Halo." Released on March 8, 2011, "Halo" has received a reputable amount of recognition not just from loyal psychedelic alt-rock fans but the broader music community as well.

The Philly-based rocker/singer/songwriter is from a blue-collared background and before finishing up his third album, "Childish Prodigy," Vile held a day job as a fork lift operator while experimenting and honing his musical craft. His hard-working and obsessive attributes leak into his guitar strumming and lyrics with full emotion, without getting overly sappy.

At first listen to "Halo," you'll immediately understand that Vile is about the music and all of its intricacies. The songwriting, song structure, and melody-- Vile has the essentials down pat, and he is only four albums into his, hopefully, long and lustrous career.

You'll find marquee songs like "Baby's Arms," "Jesus Fever," "In My Time," or self-titled "Smoke Ring for My Halo" streamlining their way through your iPod headphones or your automobile speakers, perfect for summertime fun at Presque Isle or gathering around a backyard bonfire.

"Baby's Arms" exudes a lament feeling with delicate John Fahey-type finger picking. There are so many hooks in the progression, you tend to become defenseless against Vile and his shredding skills.

"In My Time" has a happy-go-lucky flavor with Vile's interesting, yet effective vocal presence. The following track, "Ghost Town," is the exact opposite with its melancholic symmetry. Percussion and Vile's voice climb seamlessly and simultaneously for a gratifying musical peak that is worthy of repeatable listens.

Lyrics like "'Cause except for her/There just ain't nothin' to latch onto" or "Right under the moon over your house/Thought you could see it then" exhibit a bit of his childhood nostalgia, although, Vile's music isn't all apple pies and somber cries. With Vile's heavier sounds, you'll feel as if you have been warped through a Neil Young-esque wormhole of 1970s and '90s musical grungery with the enlightenment of experiencing something beyond previous recognition.

If it was ever possible, Vile achieves being intimate yet boisterous with his traveling act, The Violators. Still known as a solo act, Vile tours and practices with The Violators frequently to stay fresh with his own work. In "Halo," Vile's accomplices only add to his classic rock structures and new age spin, and picking up any slack that there may be. Before "Childish Prodigy," Vile was lambasted for his non-objective lyricism. Whatever criticism he has received before this point, has all been wiped away with one, clean stroke of the pen.

Often compared to FM rock legends such as Neil Young, Bob Segar, Tom Petty, and The Stooges, Vile revels in the fact that it is truly impossible not to imitate and note your influential musical roots, he feels that he is constructing his own genre with each album.

Sufficient for a long road-trip to the upper crust of America's countryside or just a cozy night with a significant other sipping on grape juice (or perhaps something of the alcoholic category), Vile's "Halo" is apparent in all the musical shades he demonstrates so well.