by Jay Stevens
View ProfileFacebookTwitterGoogle+RSS Feed
November 25, 2011 at 10:06 AM 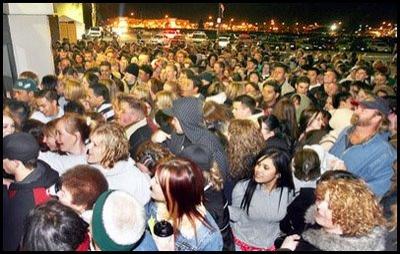 Who goes to Black Friday events anyway? I have to say, the only buzz I'm seeing about Black Friday is from people who despise it. Of course, that could be the result of my insular community and all. Still...I'm kinda hoping my insular doesn't open up to people like this:

The incident occurred shortly after 10:20 p.m. Thursday in a crowded Los Angeles-area Walmart as shoppers hungry for deals were let inside the store.

Police said the suspect shot the pepper spray when the coverings over the items she wanted were removed.

"Somehow she was trying to use it to gain an upper hand," police Lt. Abel Parga told The Associated Press early Friday.

I mean -- you have to be sh*tting me. Seriously? And I thought Pepper Spray Guy at the UC Davis protest was a sociopath. But at least that cop was spraying for an ideal -- sure, it's an authoritarian ideal and totally repulsive, but still! Who would pepper spray over a sale on electronics?

This, of course, wasn't as bad as last year when a man was trampled to death by a Black Friday crowd at a Long Island Wal Mart.

At some point, we've got to face up to the fact that our consumerism is a disease, people.