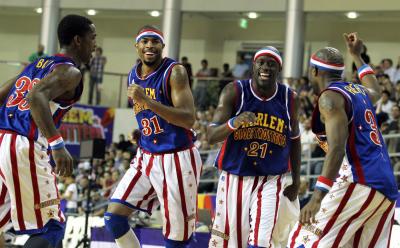 Fun fact: The Harlem Globetrotters didn't play their first official "home" game until 1968, four decades after their formation in — you guessed it, Chicago. Even if they were never technically from Harlem, they still spurred a renaissance in professional basketball.

That's because the National Basketball League was comprised exclusively of white men until the Globetrotters — all African-Americans — twice defeated the NBA's Minneapolis Lakers in the late 1940s. Noting the huge crowds drawn by the Globetrotters, the NBA officially integrated in the 1950s with the signing of Nat "Sweetwater" Clinton. Another Globetrotter graduate of that era — Wilt "The Stilt" Chamberlain — is considered one of the greatest players of all time.

Since then, the Globetrotters have become a sports-entertainment powerhouse, touring all over the world. Their performances are marked by incredibly deft ball-handing and mesmerizing dunks and trick shots, much to the embarrassment of their opponents. For the past half century, that's usually been the Washington Generals, who began traveling with the Globetrotters in 1952.

The Globetrotters soar into Erie Insurance Arena to cap off the new year's first weekend, riding an impressive winning streak. Although they've historically dominated their series against the Generals, it's not a foregone conclusion that they will win. While the Generals feign ineptitude on defense to facilitate the Globetrotters' theatrics, they do make an honest effort when they are in possession of the ball. In fact, the Globetrotters infamously lost a 1971 tilt with the Generals when the "good guys" got too cocky.

Not that they don't have the right to be proud. Paving the way for some of the sport's biggest stars is more special than any one single gravity-defying feat. Sit back, whistle along to "Sweet Georgia Brown," and watch as more record-breaking attempts are made. Have kids? Get there early for the Magic Pass Pre-show for exclusive on-court interaction with the players. It's as easy an alley-oop as there is for your family's weekend entertainment. — Matt Swanseger