Only unity can save us from the ominous storm cloud of inaction hanging over this Commonwealth. 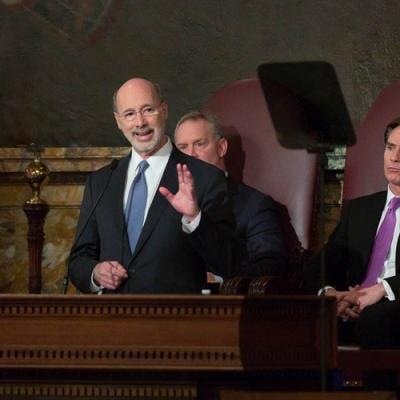 This is not a threat. This is not political posturing. This is simply what the math tells us will happen if this crisis is not resolved. – Gov. Tom Wolf, in his 2016-2017 Budget Address

By Constitution, the beginning of each February brings a look at the Commonwealth budget for the upcoming fiscal year and this year was no different. On the ninth day during a joint session of the General Assembly, Gov. Tom Wolf shared with the Senate and the House his priorities for fiscal year 2016-2017 and delivered a very clear message: This Commonwealth is at a true crossroads where the crisis is not about politics, but rather about math.

There was little detail regarding the Governor's proposed plan, as is traditional, and he spoke at the 30,000-foot level about the issues facing our Capitol. He chastised the General Assembly for a failure to address the most pressing issue of the agreed-upon structural deficit: an ominous storm cloud hanging over this Commonwealth, threatening our citizens with the gale force winds of inaction.

The Governor likened the consequences of the failure to act to a pain that will be felt by every citizen in Pennsylvania, where the "consequences will be real … they will be immediate … they will be severe." Wolf foreshadowed massive property tax increases, enormous layoffs of teachers and educational staff, and cuts to programs and services that will bear down upon our most vulnerable with a crushing weight – one that will result in unfathomable losses.

As the term "agreed-upon" implies, there is consensus on the existence of the structural deficit and a bolstering of the data by independent sources like Standard & Poor's. But that is as far as that consensus may go. "How we got here" remains a pawn of partisan politics, and "How we fix it" is an exercise in divergence at best. So that two billion dollar storm cloud swirling above the Commonwealth grows larger each day.

No one party has a lock on good ideas, and the Governor himself indicated he can accept that he won't "get his way on everything." I wholeheartedly believe that my colleagues hold the esteem of this Commonwealth as dearly as I do, and that we can find a solution.

No one party has a lock on good ideas, and the Governor himself indicated he can accept that he won't "get his way on everything." I wholeheartedly believe that my colleagues hold the esteem of this Commonwealth as dearly as I do, and that we can find a solution. We must find a solution.

It is easy and somewhat colloquial to say that the General Assembly must "put politics aside" in addressing that resolution. But as we all know, actions have a much louder voice than simple verbiage. Also, in wading through the inescapable partisan rhetoric, Democrats and Republicans are saying the same thing: Each Pennsylvanian deserves all of the best that this Commonwealth has to offer. Again, the departure is found in how to move forward.

This storm cloud of inaction is not painted an ebony hue only by a Republican brush, nor a strikingly dark purple only by a Democratic marker; rather it is colored, dyed, and highlighted by a collective hand. Only in harmony and unity will that cloud pass, preventing a tornado of destruction from touching down.