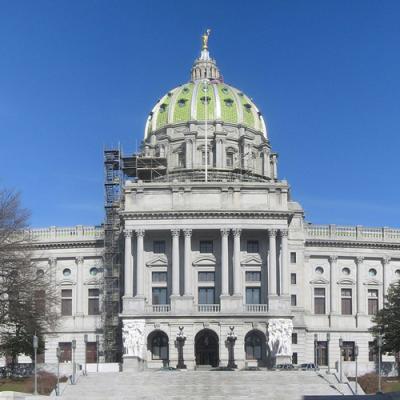 The month of March always brings college basketball fever for die-hard fans. Even casual fans seem to kick up their binge-watching a notch, as no one wants to be that person who missed the game-winning shot. As a retired collegiate basketball official, I spend most of my time watching the movements of the referees during the game, but that's probably just me. Nonetheless, it's March Madness, where team colors are proudly displayed, sleep is lost, and wagers are often won and lost at the buzzer.

It's also March Madness in the General Assembly, but in a much less acceptable or collegial way. I've often heard Albert Einstein credited with the colloquial definition of insanity: doing the same thing over and over again and expecting different results.

It seems, in fact, that the Pennsylvania General Assembly is doing the same maddening thing over and over again and expecting different results. Most recently, by passing a spending proposal (HB 1801) that was agreed to be out of balance by $220 million.

Since we are talking basketball, here's a hoops analogy that I think fits: The Wildcats continue to run the same zone defense that they have run for the last 10 years – the one every opposing team has a strategy to beat – and lose in the first round each year.

The General Assembly is employing the same business-as-usual strategy in crafting a spending proposal: a zone defense full of holes.

The General Assembly is employing the same business-as-usual strategy in crafting a spending proposal: a zone defense full of holes. In the case of the House and the Senate, the holes are plans where the math simply doesn't compute and the fiscal liability grows exponentially over time. Both chambers also refuse the necessary shift in defensemen when there is a drive into the paint by failing to address much-needed revenue for our Commonwealth.

The holes in the Wildcats' age-old defense also fail to address the NBA-bound shooting guard who is as fast as he is accurate. The General Assembly follows suit in allowing three-point shots to reign uncontested, choosing not to throw up a hand in the face of spending beyond its revenue.

Every fan, from junior high parents to NBA season ticket holders, knows that any team needs a true balance between offense and defense to be successful. We already likened the defense employed by the General Assembly to be that of Swiss cheese. And we can equate our offense to a series of plays designed to allow individual players to have the ball stolen, rather than a carefully orchestrated design that puts the ball in the hoop every time.

And yet, a different outcome is expected. The General Assembly expects to win games, and doesn't expect to be at the bottom of the division standings.

So whose bracket will survive? Who will hold the trophy and be crowned the winner in the General Assembly budget championship? With House Bill 1801 now law, there are no winners. This is simply over.

I know who the winners ought to be: the people of this Commonwealth. Our Pennsylvania citizens deserve an offense and a defense that wins, one that focuses on the end goal of investing in the future of our Commonwealth and driving the lane of prosperity. We deserve a team with its shoes tied tightly and its eye on the ball, one that is just as full of skill as it is of heart. Let's cheer for that team and stop the madness.