Facebook's good for more than shooting the breeze with your friends. As Cory Vaillancourt reports, it apparently can affect change on the local government level. 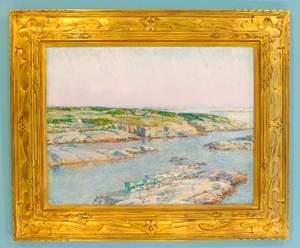 The sale of the "Summer Afternoon, Isle of Shoals" painting by American impressionist Childe Hassam has been "tabled indefinitely," Erie County Executive Barry Grossman told me last week. As you may recall, several County Council members initially supported selling the painting, but have since cooled on the idea.

So why did the winds change?

Apparently, Facebook isn't just for shooting the breeze with your friends - online activism, at least in this case, works.

"Oh, it does work," said Grossman. "The art community stepped up."

The Facebook group "Save the Hassam" was, and is, a prominent and vocal online opponent to the sale. Tempestuous discussions transpired all over our community, but members of this group memorialized them online - vetting the pros and the cons, spreading their message by garnering new group members, and mobilizing a blustery talking campaign. Apparently some members of the Council caught wind, and got "cold feet," Grossman admitted.

If you remember my aside at the end of the faerie tale that appeared in Upfront a few months back, I noted that there was, and is, no Facebook group supporting the sale of the Hassam painting. While Grossman continues to make good points in support of a sale?namely, the Blasco Library?s collections are suffering and the library continues to lack an endowment that would ensure its future?I can only wonder what might have happened had those points been aired more fully online or on Facebook; sometimes, it is not about which way the winds blow, it is about which winds blow strongest.