Have a Wild Christmas Binge at PACA

by Nick Warren
View ProfileTwitterInstagramRSS Feed
December 6, 2021 at 11:24 AM 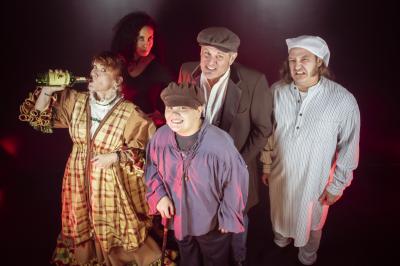 Dave Schroeder/PACA
Christopher Durang's Mrs. Bob Cratchit's Wild Christmas Binge is a twisted take on the Charles Dickens classic A Christmas Carol u2014 and a favorite of director Jeff Rodland, who will also portray Bob Cratchit during the show's two-weekend run at PACA. The show stars (from left) Char Newport, Krista Perry, Will Rodland, Jeff Rodland, and Jason Fried.

NOTE: This event has been canceled due to COVID-19

The show is a twisted take on Charles Dickens' classic A Christmas Carol. For example, the "humbug" of Scrooge (Jason Fried) is Tourette's syndrome, the Christmas ghosts are all played by one bold black woman (Krista Perry), and the lead character becomes Mrs. Bob Cratchit, Gladys (Char Newport). The ghost "has this Wayback Machine that goes funky," Rodland (who also plays Bob Cratchit) explains. "It keeps going to Cratchit's house or it'll go to The Gift of the Magi, and to Oliver at one point." He underscored that "it's a very meta play."

"I read this show when it was in manuscript form, because Durang is my favorite author, and Christmas is my favorite thing," explains Rodland. He noted that he had staged a production of the show many years ago at the Roadhouse Theatre, with a run slated at PACA five years ago that never came to fruition. This time around, the assembled cast ended up being tightly knit, a group who were essentially friends to begin with. "I always liked doing Christmas shows. I wanted to be 'Mr. Christmas,' because I could force my friends to be together for six weeks," Rodland jokes.

Regarding the show's musical nature, Rodland indicates that "it's a straight play. It has an opening and closing number and a couple of incidental songs," sung in a manner befitting the characters themselves, 1800s Dickensian Londoners.

For a totally inverted retelling of a tale we know all-too-well, PACA has the goods that should bless us, everyone.