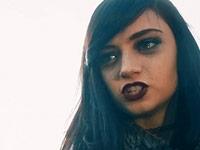 Leave it to the Erie Movie House to find the strangest, most off-the-wall, most creative, and most exciting movies playing today. This week the Movie House has another special treat for audiences looking for something beyond what the multiplexes will show, because The Theta Girl, an imaginative little indie title is making its Pennsylvania debut on September 14th.

Set in a bizarre alternate present, the film follows Gayce (Victoria Elizabeth Donofrio), a dealer in a new mind-expanding drug called Theta that she sells to attendees of concerts for her friends' all-girl rock band. However, when a mysterious killer begins murdering her friends, Gayce finds herself on the run from cops and criminals alike while also trying to learn the terrifying truth about Theta and maybe even her whole world.

Made on an estimated $14,000, the film makes up for its small budget with a relentless energy, some otherworldly dream sequences and a few truly shocking kills. Though clearly inspired by exploitation films of the "video nasty" era, the film isn't content simply being a paint-by-numbers homage or a dull self-parody. Instead, it takes its story seriously and uses its 1980s style not to wrap audiences in comforting nostalgia, but as a true stylistic choice. The result is a groovy, surreal punk-rock splatter film that is easily one of the more entertaining bargain basement movies I've seen in quite some time. So, check out The Theta Girl at the Erie Movie House on Friday, September 14th at 8 p.m., hosted by SlaughterFilm.com co-hosts Cory Carr and yours truly. — Forest Taylor