Searching is Mostly Great, Until It Isn't 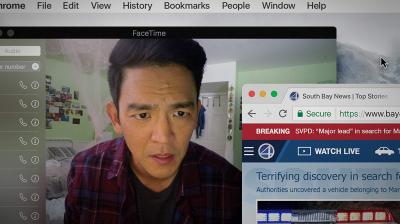 The "Social Media" film is a very new concept in movie-making but it is already making waves. In these times it seems like a natural progression for the way that stories can be told and I've seen filmmakers use the intriguing premise for genres like romance (the tragically under-seen Hank & Asha) and horror (the overrated Unfriended). Searching gives us a drama/mystery taking place entirely on social media and its story is an interesting statement for how we process information and maintain relationships in the Information Age. Unfortunately, by the end it settles on becoming a bad CSI episode.

After his 16-year-old daughter goes missing, David Kim (John Cho) begins looking for clues to her whereabouts in the place that she spends the most time: the Internet. His desperate search is filled with twists, secrets, and the most shocking discovery he could find: that his daughter was not the person he thought she was.

The first half of the film makes for a compelling societal critique. The idea that people think they know someone because of their online presence only to find that that's just a mask that people can project to the world is an idea that could fill an entire movie. Sadly, the mystery starts to take over in the second half and the film suffers because of it, culminating in a finale so ridiculous that it practically ruins the entire film. I wish that I could give Searching a higher rating because the premise is solid, but the ending is so convenient, ludicrous, and frankly insulting that it just can't make the grade. — Forest Taylor