Helter Skelter: Once Upon a Time ... in Hollywood Provides Both Good and Bad Surprises 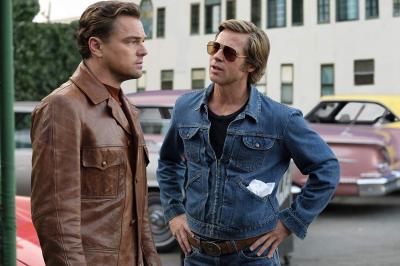 For an entire decade now, Quentin Tarantino has been obsessed with taking period films and putting his own unique twist on them — twists that are always influenced by a life spent watching exploitation B-movies. It seems obvious that he would eventually set a film during that wonderful period of the New Hollywood, when the movie world was changing in fascinating and occasionally horrifying ways. However, Tarantino's take on this gloriously strange time is surprisingly restrained, for better and for worse.

The film follows Rick Dalton (Leonardo DiCaprio), an aging Western star desperately trying to reclaim some of his old glory, and his best friend/stuntman Cliff Booth (Brad Pitt) as he auditions for new roles and contemplates his place in a radically changing film industry. This change is further exacerbated due to the fact that rising starlet Sharon Tate (a wonderfully vivacious Margot Robbie) lives right next door to him; a fact that any follower of Hollywood history knows is about to turn tragic very soon.

The film plays out as a collection of episodes that work terrifically on their own (shout-out to Mike Moh in an incredible cameo as Bruce Lee), but the story never comes together with any of the impact that is expected of this filmmaker. I don't think I'm spoiling anything to say that this "true" story doesn't go the way that we're expecting (any viewer of Inglourious Basterds should already know that), but in the end I was left wondering what the point was to telling this story aside from simple wish-fulfillment fantasy. In many ways this may be Tarantino's most restrained film, and in just as many ways that also makes it his least memorable. — Forest Taylor

Once Upon a Time in HollywoodQuentin Tarantino