Here Be Dragons: She Kills Monsters at the Erie Playhouse 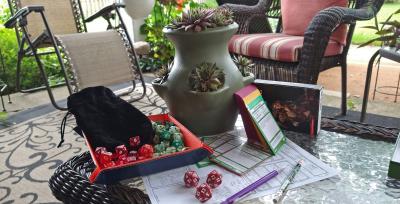 Many things have slowed down, ceased, or changed format from that which we are accustomed to. That doesn't mean however that there aren't viable alternatives available, and a number of ways to have new, and meaningful experiences. The Erie Playhouse will present She Kills Monsters by Qui Nguyen. The play, which premiered off-broadway in 2011, centers around Agnes Evans who, after a tragedy finds herself playing Dungeons and Dragons, to both help understand and cope with her recent loss.

I was fortunate enough to see a wonderful production of She Kills Monsters in 2019 at Mercyhurst University, directed by Brett Johnson. One of the many positive aspects of this production was the spectacle. The lighting, sound, music, puppet work moving sets, were all exceptional. The production being presented by the Erie Playhouse on August 6 will not have many of those aspects. That however is a good thing. We as an audience will have an excellent opportunity to imbibe some truly excellent text, and like tabletop roleplaying would dictate, let our imaginations do the work.

I spoke with director Domenic Del Greco who noted how presenting it online adds to the show. "Being a bit an of a D &D nerd myself, there is a certain atmosphere with playing the game that is story theater. You're asking the audience the same as of the players to suspend disbelief. You're saying you're in cave or cavern, and we are asking to suspend their disbelief for the fantasy aspect"

I asked Del Greco about the advantages of doing a production of this particular show and having it be stripped down. He stated, "Whenever you play [D&D] you are visualizing, we are using some cool props and costumes. What we can accomplish, it might not be what we could onstage, but that's indicative of what we are emulating, and a lot of people who are playing D&D now are now on zoom so it's more realistic for the time."

The play focuses on two stories, one of Agnes in the real world and one taking place in the imaginary game of D&D. The play does go very deep into the details of the game and how it's played, so I asked Dom how he and the actors prepared for this. He stated "I don't wish to out their nerddom, but many have had some D&D experience, and have played and experienced the comradery of it, If you approach the script from the angle of people that were outcast that didn't have another way to socialize. Also, D&D has become wildly popular, and when I was in high school you didn't talk about it, it was like Fight Club. From when the script was written to now it's insane how popular it became."

The play is both epic in content and what it covers, from charming and hilarious moments to ones where you find yourself with a lump in your throat. Asked about what he wants the actors and audience to take away from the production Del Greco thoughtfully stated, "We did talk about childhood devolvement and psychology, and dealing with death when it comes early, and what comes up when dealing with it. It's an important thing that we do as artists that we at least poke at things that make people uncomfortable. This script is amazing for that it's so funny, and brilliant, and sweet, but also handles things like the death of a child."

So while many of us are yearning to things to return to how they were, don't pass up opportunities for great stories when they come along. Sit back, close your eyes, and let your imagination take you along the wild ride of She Kills Monsters.

She Kills Monsters will be shown Live August 6 and through a video on demand August 7, 8, and 9. For more details visit. erieplayhouse.org or check The Erie Playhouse Facebook page or app.