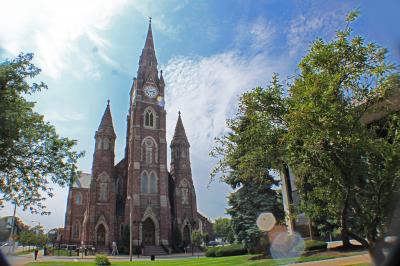 Growing up in the 1980s, I thought I had a clear idea of what a child sexual predator looked like. Middle-aged, disheveled, maybe balding or mustachioed. Spending his days on the periphery of a playground beside a suspiciously dark, unmarked van. If he offered me candy and I refused, I was presumably safe from harm.

I was warned about this kind of predator during the height of the "stranger danger" panic, when concerned parents like mine were doing their best with the information they had. Some of the advice still makes sense — if unfamiliar adults act suspiciously, it's probably best to avoid them. And there are obviously plenty of horrifying assault cases involving strangers. Still, if we want to be accurate and honest about child sexual abuse, the iconic molester-at-the-edge-of-the-park is a strikingly poor indicator of where such horrors are likely to occur.

According to our government's National Sex Offender Public Website (NSOPW), only about 10 percent of those who perpetrate child sexual abuse are strangers to the child. Thirty percent are family members, and the remaining 60 percent are often neighbors, babysitters, family friends, child care providers, and members of the clergy.

Reading the Pennsylvania Attorney General's recent grand jury report regarding sexual abuse in the Catholic Church, I was reminded of the "stranger danger" panic and how it allows us to circumvent some of the most disturbing aspects of abuse. For the unfamiliar, the report uncovers the sexual assault of over 1,000 children, perpetrated by 301 priests in six statewide dioceses. These abusers weren't anonymous perverts hiding in the bushes — they were some of the most trusted leaders in our communities. People who were sought out for their mentorship and spiritual guidance. People who built intimate relationships not only with the young and vulnerable, but also with their parents and guardians.

The grand jury summarizes their findings with alarming frankness: "Priests were raping little boys and girls, and the men of God who were responsible for them not only did nothing; they hid it all. For decades."

The sleaze oozes into our community as well. In the Diocese of Erie, the report uncovers 41 offenders, many of whom openly confessed their crimes to church authorities. In response, most abusers were shuffled from parish to parish or sent to church-run psychiatric evaluation centers. Euphemisms concealed the horrors. "Inappropriate contact" instead of "rape." "Boundary issues" instead of "predatory behavior." And the public was kept in the dark, deliberately, for decades.

The specifics of the cases are often shockingly redundant. Assault, confession, counseling, reassignment — the patterns quickly become clear. Victim suicides appear several times throughout the accounts, making them tragic as well as infuriating.

Or I could focus on the longer cases, charting the path of Father Thomas Smith as he fled abuse allegations in Frenchville in 1984 and was transferred to Union City soon after. While there, he informed Bishop Michael Murphy that he'd sexually molested at least 15 children. Murphy then sent him to a parish in Warren where "conduct in violation of his aftercare agreement" forced him to flee again. Between 1984 and 1992, Smith was twice sent to residential psychological therapy facilities. One of his counselors noted his "driven, compulsive, and longstanding" obsession with the sexual assault of children. In the summer of 1992, he arrived at the Holy Rosary Parish in Erie. At this time, Bishop Donald W. Trautman encouraged him to become active in a youth ministry program called Isaiah 43. Despite being notified about multiple serious allegations, Trautman allowed him to remain in the program until March of 1994 — literally a decade after the first reported case of his abusive behavior.

It's hard to read a report like this without feeling a sense of the resignation that comes from familiarity. I'm old enough to remember the outrage in 1992 when Sinéad O'Connor ripped up a photo of Pope John Paul II on Saturday Night Live to draw attention to the same issues. A report unveiled in 2002 by The Boston Globe concerning abuses in the Archdiocese of Boston lead to a Pulitzer Prize and an Oscar-winning movie. Two years later, a document issued by the John Jay College of Criminal Justice identified 6,700 allegations against members of the U.S. clergy between 1950 and 2002. In short, the grand jury report I've spent the past week analyzing is not only horrifying — it's also, frankly, unsurprising.

It's also not shocking that the national news has mostly moved on at this point. Consider the number of articles you've read about this report and contrast it to the number of times you've heard the word "Omarosa" since its release. It's infuriating.

Here I should mention that I'm not a neutral observer when it comes to these issues. I grew up Catholic, spent a decade in Catholic school, went to church every Sunday until I was 18 ... and heard plenty of rumors about members of the clergy. My relatives would share tales of suspicion after a few drinks at holiday gatherings. My classmates would express confusion about inappropriate affection from teachers, coaches, or counselors. Homophobic jokes trivialized stories that turned out not to be trivial years later. Troubling gossip flourished.

I also worked for two years in my parish rectory. During that time, in my early teens, I was in fairly close contact with a priest who would later be accused of sexual abuse on two occasions. I'm choosing not to name him — despite my near-certainty that the accusations were valid — because he was found not guilty both times, and because I never experienced anything inappropriate personally.

When I think of him now, I can't help remembering that I kind of liked him, as much as I wish I didn't. He reminded me a bit of Robin Williams — bearded, slightly bohemian, quick-witted, and frequently anxious. It was the early '90s, and the "Satanic panic" of the time caused many adults to condemn my affection for hard rock and heavy metal. By contrast, this priest was actively interested in talking to me about music. He was the only adult I knew that had heard of Smashing Pumpkins before Siamese Dream was released, for example. This seemed both cool and alluringly unusual at age 14.

I'm not relaying this to "humanize" the priest, but to draw attention to how easily I could have been "groomed" into a more intimate relationship with him. Were these conversations a sign of solidarity between a 14-year-old outcast and a middle-aged one? Or were they some sort of cryptic foreplay that thankfully never amounted to anything?

I honestly don't know the answer. And it's hard to imagine a satisfying reckoning with these issues presently as well. The grand jury report makes some decent suggestions, mostly designed to circumvent laws that prevent long-gone atrocities from being revisited. Their proposed "civil window" law, which would allow older victims to sue the dioceses for damages done when they were kids, seems like a great idea. Philosophically, their call to "make it clear that the duty to report a child abuser continues as long as there's reason to believe he will do it again" seems urgently necessary.

The report also singles out Erie's current bishop, Lawrence Persico, as "forthright and heartfelt." Of the six bishops who submitted reports, Persico was the only one who appeared before the grand jury in person. He has also issued a public offer to pay for counseling for abuse victims, regardless of how much time has passed and whether or not the victim lives in our region.

I guess that's something. But I'm also a bit wary of the impulse to find a hero buried beneath the atrocious details of this story. There are undoubtedly far more stories of abuse in our community than the hundreds we just became aware of. According to the Bureau of Justice Statistics, about 2 out of 3 sexual assaults in the U.S. go unreported. In cases like this, where many of the perpetrators claimed a direct connection to God almighty, I shudder to think about how much we still aren't hearing.

I'm the kind of person who jokingly refers to myself as a "recovering Catholic." And while I wouldn't necessarily refer to myself as a capital-A atheist, it's hard to read a report like this without feeling all my teen angst about "organized religion" return to the surface. When I attempt to wrap my head around the diabolical institutional maneuvering it took to keep these stories from being heard, it's hard not conclude that there's still plenty of poison in the well in need of extracting.

It's hard to imagine a solution to these problems that doesn't involve frequent, frank discussions about sexuality. And I honestly can't imagine that happening in good faith in the Catholic church. There are too many obstacles within the organization — about human behavior, sexual pleasure, women's bodies, and LGBTQ issues — to envision a genuinely open dialogue about this catastrophic legacy of abuse.

The Attorney General's report might not be enough to reconcile all wounds, but at least it sends a clear signal that people are paying attention. If we can't rewrite history, we can at least demand accountability. If we can't radically reform the church we can at least hold a mirror up to it. I wish our voices were louder.

Dan Schank can be reached at dschank@eriereader.com.