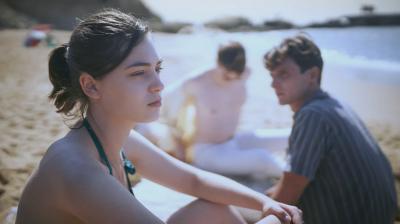 Rating: Five stars out of Five

When Audrey Diwan (Losing It) made a film set 60 years ago in France, I doubt she would have expected it to become the most politically important film to American audiences in 2022. However, since our country is perpetually fighting the same battles for basic human rights, Happening is disturbingly relevant in our current age. Diwan expertly displays the horrors that individuals must go through when their bodily autonomy is denied them and the film joins the ranks of 4 Months, 3 Weeks and 2 Days and Never Rarely Sometimes Always as one of the most brilliant pleas for reproductive rights ever made.

Based on the real-life memoirs of Annie Ernaux, the film is set in France in the early 1960s. Annie (Anamaria Vartolomei) is a smart, driven university student who finds her life changed after a one-night stand leaves her pregnant. Wishing to complete her education, Annie plans to terminate the pregnancy but as abortion is still illegal in France, this becomes an uphill battle. As the weeks tick by and her friends and colleagues start to abandon her, Annie turns to increasingly desperate means to abort, at the risk of both her freedom and her life

The tight 1.37:1 aspect ratio creates a suffocating, paranoid atmosphere and the close, handheld camerawork keeps us in Annie's POV at all times. The result is a film of quiet, small gestures that is also screaming about the injustice of its protagonist's situation. When governments dictate what can and cannot be done with one's own body, they put innocent people in these harrowing situations. This film should be screened at the Supreme Court on a daily basis. Happening currently playing in select theaters and is available on Amazon Prime, Apple TV+, Google Play, YouTube, and Vudu. — Forest Taylor