Hoisting Up Some History and, well, a Duck 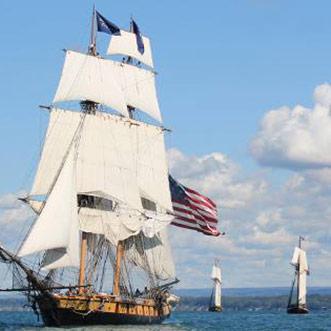 Whether you go for the history, the maritime entertainment, or simply the sight of magnificent sails on the horizon, the Tall Ships Festival might be just what you need for sailing into late summer.

The festival launches with the Parade of Sails at 4 p.m. on Sept. 8 and ends three days later as nine tall ships set off for their next ports of call. In between, the bayfront becomes a celebration of all things nautical.

The ships are, of course, the centerpieces of the festival. Our beloved Niagara will lead the parade, joined by the schooners When and If, Mists of Avalon, Appledore IV, and Denis Sullivan; brigantines Pathfinder and Playfair; the clipper Pride of Baltimore II, and the galleon El Galeon, a replica of a galleon that was part of Spain's West Indies fleet in the sixteenth century.

The majesty of the parade will get a shot of whimsy this year when The World's Largest Rubber Duck paddles into the bay along with the ships. This inflated fowl stands (sits?) more than six stories tall. It's 64 feet wide and 74 feet long. And although a floating marvel, it weighs an impressive 11 tons.

Afterward, the vessels and duck will be berthed at the Bayfront Convention Center, Dobbins Landing, and the Erie Maritime Museum. Unfortunately, the sail-aways – short trips on some of the ships during the festival – are already sold out.

Besides touring the ships and taking selfies with the duck, live music (and a cold one) will be available at the Labatt Beer Garden in the Bayfront Convention Center. Musical offerings there are diverse, from the current pop of local band First to Eleven to seafaring and pirate songs from Tom Mason and the Blue Buccaneers. The Hardtackers will perform traditional sea shanties, and a few other folk and acoustic entertainers round out the lineup.

The convention center will also host a festival marketplace, presentations about underwater archeology, and the War of 1812 shipwrecks. Additionally, you'll be able to visit the Pennsylvania Woodmobile to learn about Pennsylvania forests, and the Drake Well Museum's Meet-U Energy Education trailer, which teaches about oil heritage and the modern-day oil and natural gas industries.

The Erie Maritime Museum is hosting fun and learning for all ages, too. Several members of the regional Science Alliance will be presenting hands-on science explorations. Plus, there will be naval gunnery and sail handling demonstrations, a historical reenactment of the life of a British sailor, and artisans from the Mystic Seaport Museum.

With several Tall Ship events under our belt, it's no surprise that Erieites are looking forward to this one. So is the crew of the Niagara, who, once again, gets to show off its home port.

Niagara Captain William Sabatini is excited to be a part of it. "We have ships joining us for the first time and some old favorites returning. Everyone is bound to have a good time at Tall Ships Erie."

And everyone will, including me. I love the ships, the history, the fun. But if you must know, I'm going for the duck.