Holiday entertainment will arrive at the Warner Theatre on Nov. 10 with a cappella group Straight No Chaser. 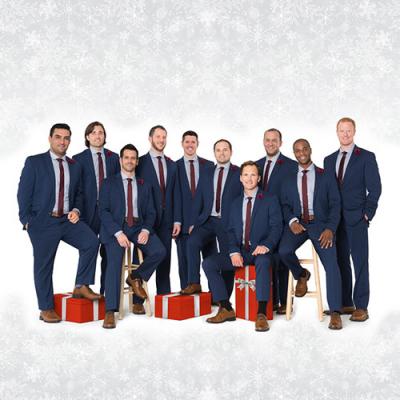 It's a bit too early for sugarplums to dance in anyone's heads, but holiday entertainment will arrive at the Warner Theatre on Nov. 10 with a cappella group Straight No Chaser. Raise a glass to this outfit who present their aptly-named "I'll Have Another … 20th Anniversary World Tour" celebrating their formation in 1996 and first ever gig at Indiana University. Singer Steve Morgan, one of the band's original members, explains the group's humble beginnings: "We started out by begging sororities and dorms to let us come in and sing for anyone who would listen. Now, we are fortunate enough to be able to sing for thousands of people a night (and we only have to beg some of them!). Also, we give a lot of thought now to the 'show'; anyone who has seen our show knows that we are more than just a concert, we want to entertain you every step of the way."

Raise a glass to this outfit who present their aptly-named "I'll Have Another ... 20th Anniversary Tour."

Concertgoers can expect seasonal tunes from the group's latest release, I'll Have Another … Christmas Album, which dropped on Friday, Oct. 28. It's their first full-length holiday album since 2009, and includes Christmas classics both old and new: traditional carols and modern holiday pop favorites. Straight No Chaser also added a few original tunes to the mix, such as "Feels Like Christmas," which features Jana Kramer. "We heard from fans in certain markets that have never been able to see our Christmas show, so we have been rolling with our holiday set since the tour began in mid-October. It has definitely given the show a different feel than how we normally start our fall tour, but that's been great to mix things up," Morgan adds.

The all-male outfit cites some of their influences as The Beatles, The Beach Boys, Sting, Dave Brubeck and Timbaland. Audiences will surely be treated to an eclectic performance this November. "So grab a drink, enjoy the show, and laugh right along with us," Morgan laughs. "You owe it to yourself after making it through this election season!" – Miriam Lamey