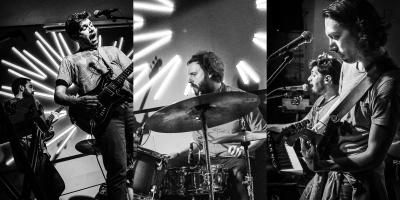 It's easy to feel small in a big city. You think you've arrived at the place to be, but where is your place in this crazy confluence of people and situations and ideas? How is it that one can be surrounded by everyone and everything yet feel like no one and nothing? There is at times the sense of being lost in the vastness of space, each illuminated skyscraper and high-rise apartment building a star seemingly separated by a distance of light years.

Filter that angst through months of shelter-in-place and social isolation and you have the recipe for serious art. The native Erieites behind NYC-based band Hollow Engine channel those deep, challenging emotions into music that is not angry and frustrated but instead pensive and inquisitive, probing into the immensities of urban struggle on both a personal and societal level. Stylistically, Hollow Engine is an adventurous amalgamation of psych and prog rock, shoegaze, and jazz, citing a diverse set of influences including The Byrds, Milton Nascimento, Lo Borges, Brian Blade & The Fellowship Band, The Beatles, Jimi Hendrix, The Tages, Pink Floyd, and Dungen.

Hollow Engine — which consists of brothers Cory (guitar/keys/vocals) and Robin Peterson (drums), their high school friend Kevin Kniowski (bass/guitar/vocals), and later addition Griffin Novie (guitar/keys/vocals) — had lived in New York for eight years before releasing their self-titled first EP in 2018, the delay a byproduct of an uncompromising quest for a musical blend unique enough to call their own. The band labels it "the sound of continuous implosion" — you know, like a neutron star or black hole.

It's certainly more approachable than that — while viewing a live performance recording of their upcoming EP release Song of Tiny Notions, I do at times feel transported to another dimension, but there is certainly plenty of structure to keep me grounded. A solid core of rhythm, melody, and harmony provide the gravitational field as the band locks with security cameras looking on, lending the production a "grainy and voyeuristic aesthetic." Further reinforcing the retro vibes are excerpts from '70s astronomy education videos interlaced between songs or song sections.

Despite sophisticated chord progressions and use of modal mixture, none of the five songs veer too far into outer space, avoiding the gratuitous and self-serving asides often denounced by detractors of the psych and prog genres. I found myself especially drawn to the mellowly awestruck tones of "Aimlessly Away" and the groovy, blues-inflected riffs of closer "Strange World Outside My Window," but if you appreciate skilled musicianship (the Petersons are sons of a jazz musician), you'll find little not to like with Song of Tiny Notions.

After my initial listen, Cory took me through the creative process behind each track:

If you've found yourself yearning to connect with some new tunes, be sure to listen by following the lhe links below: