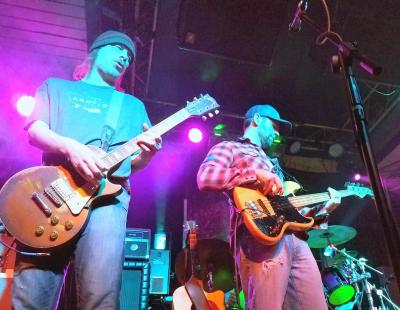 Ekoostik hookah were a high note the last couple of times they hit the King's Rook Club stage — in late 2017, then at the end of 2018 — that they've decided not to stay away quite so long this next time around.

Make no mistake: The Columbus, Ohio-based hookah — a long-lived and well-loved group that's been a preeminent powerhouse in the festie scene and jam band community-at-large for nearly three decades running — are no strangers to the area.

They've joined in and headlined multiple musical gatherings at numerous locales through the years, going all the way back to the Forward Hall days of the 1990s, and, in the more recent past, at the gone-but-not-forgotten Crooked i, as well as various summer music fests around the region — including what's been a mainstay position in the lineup at the annual Gathering at Chaffee's.

They'll be back at the Rook on Nov. 9, bringing yet another double-dose (that is, two sets) of hookah to the Gem City.

As always, a couple of nice hits off that goodness should be just what the doctor ordered to start really ringing in the holiday season.

Well, fellas, it stands to let you know once again we've always liked a bit of the hookah, too, and look forward to the journey it'll take us on this time around. — Ryan Smith