Embracing anniversaries, landmarks, and new endeavors into the new year – despite the pandemic 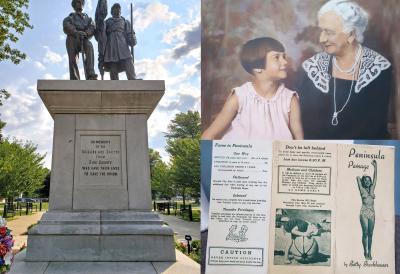 Liz Allen
[Clockwise from left] According to Erie History - The Women's Story - Mrs. Isaac Moorhead, Miss Helen Ball and Miss Sarah Reed raised $10,000 for this Civil War monument. Erected in 1872, it stands in the west end of Perry Square. The Sarah A. Reed Children's Center and the Sarah Reed Senior Living Center are marking 150 years of service to Erie this year. The two institutions were only named after founder Sarah Reed, pictured with an unnamed child, after her death in 1934 at age 96. This 1930s brochure for the Erie Coach Company advertises bus service to the Peninsula, as Presque Isle was commonly called. Author Betty Brookhauser, who became Betty Peebles when she married, later became the society editor for the Erie Daily Times.

Pandemic fatigue made the customary review of the old year and predictions for the new one a challenge.

But after I jogged my memory, I realized that Erie had much to celebrate in 2021. I also devised a wish list for the new year, thanks in part to an influential woman from Erie's past.

In 2021, we marked the 100th anniversary of Presque Isle State Park and a partnership was formed to operate the Presque Isle Lighthouse and the Erie Land Lighthouse with the same staff. In addition to boosting tourism, this arrangement will also help highlight Erie's historic east side.

All Aboard Erie was chosen to lead the new Lakeshore Rail Alliance, to advocate for better passenger train service.

The Erie SeaWolves generated oodles of positive PR by reuniting cast members from the Erie-themed Tom Hanks' movie That Thing You Do! at the Sept. 4 ballgame, making a lot of us proud to boast "I'm from Erie, PA!"

As the year wound down, we learned that a $16,000 grant from the Pennsylvania Humanities Council will pay for interpretive signs for "African Americans in Erie: A Trail of Shared Heritage," a countywide walking/driving tour.

The Erie County Public Library and the Burleigh Legacy Alliance have also engaged a professional archivist for the "Ada Lawrence-Johnny Johnson Preservation Project" to catalogue, house, and preserve primary documents about Erie's African American heritage. That work is underway as the Erie County Library observes a low-key but important celebration of 25 years on the bayfront.

It was also big news when the Hagen History Center landed an impressive collection of Frank Lloyd Wright artifacts. The Erie exhibit is expected to bring in tourists interested in Wright's architectural work between Buffalo and southwest Pennsylvania.

But the person I got to know at the History Center isn't the Wisconsin-born Wright but Erieite Sarah Reed, a philanthropist and social-service innovator who died in 1934 at age 96.

Reed's commitment to the civic good helped me to think about ways that Erie's past can shape a better future. The Hagen History Center also inspired my short, eclectic wish list for 2022:

Let's rededicate the Civil War monument in Perry Square on its 150th anniversary.

Let's listen to grassroots ideas as we improve public parks; my own suggestion is to start a Griswold festival at Griswold Plaza.

At the Hagen History Center on Dec. 5, most people were buzzing about the new Frank Lloyd Wright exhibits, including his intact San Francisco office.

But I gravitated to two displays that share space with the Wright stuff in the new Exhibit Hall.

Labeled "Keeping Up" and "Designing Erie," the exhibits include photos and descriptions of the old Erie County Home, the Pennsylvania Soldiers' and Sailors' Home, the Gertrude Barber Center, the 1915 Mill Creek Flood, the construction of the Mill Creek Tube, and Sarah Reed. That's a lot of Erie history to cover in a compact space, especially because that exhibit competes with Wright's glamorous 1930 Cord L-29 Cabriolet automobile and a model for his Butterfly Bridge, a concrete span designed but never built to connect Oakland and San Francisco.

At the "Keeping Up" and "Designing Erie" kiosk, I ran into Gary and Roberta Bukowski, longtime Erie boosters and history buffs, as they were reading about Sarah Reed.

Gary, vice president for development at the Sarah A. Reed Children's Center, has immersed himself in studying Reed's life for the Children's Center and the Sarah Reed Senior Living Center 150th anniversary, which began in 2021 and continues through 2022.

"The more I studied Sarah Reed, the more intrigued I became with her," said Bukowski. "She was really a Renaissance woman."

In 1871, concerned that the Erie Alms House was not a suitable place for children, Reed and 29 other women founded the "Erie Association for Improving the Conditions of the Poor and a Home for the Friendless," to help children and "old ladies."

Within months, they received a charter for Erie's first social service organization, secured a location and opened the doors. "There was this community spirit that exists with putting all of this together, with all the people who got involved, all the community members reaching out to each other," Bukowski said.

One year later, in 1872, Reed and two other prominent women revived a faltering campaign to raise money for a Civil War monument in Erie. Featuring a soldier and a sailor with the Union flag, the monument faces Peach Street at the west end of Perry Square.

I have no idea what Miss Reed's politics would be today, but one year after the Jan. 6 insurrection and with ongoing threats to our democracy, the monument's inscription holds special weight today: "In memory of the soldiers and sailors from Erie County who gave their lives to save the union."

Rededicating the statue for its 150th anniversary would honor the resolve and sacrifice of men and women from the Civil War era and remind us of the need to "save the union."

Thanks to Bukowski and Erie History — The Women's Story, a book by Sabina Shields Freeman and Margaret L. Tenpas, I also learned that Reed played a major role in rescuing the U.S. Brig Niagara from Misery Bay for the Perry Centennial in 1913.

That same year, famed urban planner John Nolen unveiled his "General Plan for the Extension and Improvement" of the City of Erie. His 1913 plan recommended a greenway around the city, lots of boulevards, a public market on Parade Street and plenty of parks, including on Erie's neglected east side.

The framed color-coded map of the Nolen plan in the History Center's Exhibit Hall shows that Nolen also envisioned a connection between Erie's east side and the tip of Presque Isle. Perhaps a ferry? I'm not sure.

But I do know about the water taxi from Dobbins Landing to Presque Isle, a delightful but expensive ride, which ended after 2019, and that the Presque Isle Express bus caters to west-siders instead of those on the east side.

Again, history holds lessons. A Blasco Library display about Presque Isle's 100th anniversary included a 1930s Erie Coach Company brochure, touting new service from 10th and State streets to the peninsula on Saturdays, Sundays, Wednesdays, and holidays; kids under five rode free. The bus company said it was "ever conscious of the needs of the public."

We, in turn, should be "ever conscious" that it's an equity issue to provide better connections from the city of Erie to Presque Isle. How many needy Erie families never have the joy of going to our beach?

Ferry service would also be a boon for tourism and the environment. In fact, a draft report for "Destination Erie," Erie County's long-range plan, pointed out that our waterfront is a jewel with a missing gem — a connection between the city and the peninsula. We can start to fix that in 2022 with a robust plan to revive ferry service. Equitable access to recreation on the waterfront's east side should also be integral to any plans for redeveloping the old Erie Coke site.

My biggest takeaway from learning a bit about Sarah Reed is that it's in Erie's DNA to care about those in need. But if we don't know the stories of women like Reed and if we aren't familiar with the history of Erie's marginalized populations, we can't remedy the deliberate and/or benign decisions that create inequities.

It might seem odd, then, that the kitchen in the Watson-Curtze Mansion at the History Center inspired another item on my wish list — a Griswold Festival in Griswold Plaza. Sarah Reed certainly demonstrated that women belonged in the world beyond the kitchen.

But seeing the array of Griswold Manufacturing items in the mansion's kitchen — a bunny-cake mold, tea kettle, waffle irons, meat grinders, muffin tins, pots, and pans -- made me wonder how we can celebrate Erie's manufacturing heritage.

When I read in June that a public-private partnership had proposed to upgrade Griswold Plaza, dedicated in 1930, by changing the park's name to Station Square, I was irked. The business people involved later clarified that Station Square would be the name of their organization, not the park's new name.

Still, the group missed an opportunity. When we brag about Erie, we don't just think about pepperoni balls, sponge candy, and ox roast. We also take pride in GE locomotives, Marx toys, and Griswold cookware. The enduring appeal of Griswold cast-iron cookware was revealed in an Oct. 28 Pittsburgh Post-Gazette story, "Channeling his Erie roots by restoring Griswold cast-iron skillets."

The story featured former Erie resident Mike Sanders, a Pittsburgh musician, concert promoter, and restaurateur who now has a side business restoring Griswold products. Reporter Gretchen McKay wrote: "While you can take a boy out of Erie, can you ever really take Erie out of a boy?"

Before we "improve" Griswold Plaza or any other public spaces, let's listen to Erie people beyond those with money and influence. Seek out the longtime residents and the newcomers. Talk to parents pushing strollers, the elderly chatting on benches, those who are homeless talking with each other on blankets.

Sarah Reed, who led a privileged life, might have been one of those wielding power over community decision-making today. Then again, she was devoted to helping the less fortunate, and she humbly shunned recognition when she was alive. "She refused to let anyone name the organization after her," Bukowski said.

She wanted action, not accolades. Together, I'm certain we can cook up good ideas to make all of Erie a better place.

Liz Allen can be reached at lizallenerie@gmail.com.