How the Grinch Stole a Birthday 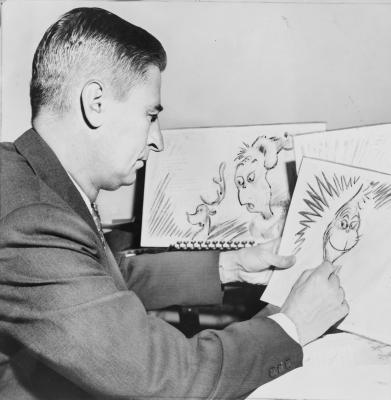 Library of Congress
Dr. Seuss sketches one of his most infamous characters, The Grinch, in the mid-1950s. *How the Grinch Stole Christmas would go on to become one of his best-selling books and the focus of two film adaptations and a musical. The Erie Contemporary Ballet Theatre will put on a production of the musical at General McLane Auditorium in honor of Seuss' 116th birthday.

Glittering white snow falls atop the houses of Whoville, as the children inside dream of candy canes and presents tied with beautiful bows. Meanwhile, the green cave-dwelling curmudgeon known as the Grinch treks down from Mt. Crumpit to avenge the Christmas spirit.

The Erie Contemporary Ballet Theatre presents How the Grinch Stole Christmas to celebrate author Dr. Seuss' 116th birthday. Back by popular demand, the production was once a tradition for the ballet company from 2003-2014 but was replaced with The Nutcracker.

This one-hour classic consists of acrobatics, ballet, jazz, tap, acting, and live narration, with over 60 dancers. The cast includes Drew Smith as the Grinch and nine-year-old Olivia McVeagh as Max the Dog, dancers Vivian Campbell and Avery Cardinali (as Cindy Lou Who), with Kellen Smith narrating.

When prompted by the narrator, children are encouraged to yell "You're mean!" during the show, to bring some Seussical fun to the performance. Have yourself a merry March see one of these two performances at the General McLane Auditorium. Tickets will be available online and at the door.