How To Make 'Erie Pickles'

Nineteenth-century author's advice on putting summer produce to good use

by Jonathan Burdick
View ProfileTwitterInstagramRSS Feed
August 28, 2019 at 10:45 AM 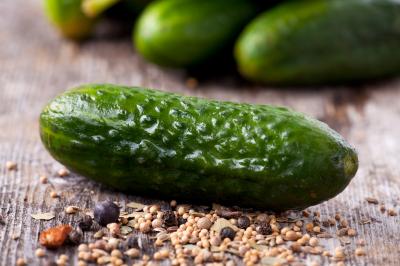 Bernd Ju00fcrgens
Today's pickled cucumbers are synonymous with dill. However, prior to the early 20th century, gourmands such as author Laura C. Sterrett (*The Erie Cook Book) had much different recipes for pickles.

Tired of the same old Vlasic Dill Pickles? Did you miss the deadline for the Pickle-of-the-Month Club from French Street Farms? If so and you are craving some unique pickled goodness, Laura C. Sterrett has just the solution for you: homemade 19th century Erie pickles.

I have written about Sterrett's rather remarkable The Erie Cook Book before (see: "Bake a Heart Like You Would Roast Beef: Practical Advice for 19th Century Erieites"). The cookbook, compiled and arranged by Sterrett for publication in 1881, is a collection of Erie recipes, some from her well-known family's kitchens and some from other locals.

So, if you're looking to make some pickles with those late-summer cucumbers of yours, why not heed the advice of those who were here in Erie long before us and use some historic local pickle recipes? In her chapter dedicated to the food, Sterrett begins with some practical pickling advice.

"[U]se none but the best cider vinegar and boil in a porcelain kettle—never in metal," she advises.

Want to get extremely authentic with your pickle-making? She provides a recipe for her homemade vinegar:­­­­­­

"Boil slowly for one hour three pounds of very coarse brown sugar in three gallons of water, work it with a little yeast, the same as you would beer; then put it into a cask, and expose it to the sun … and it soon will become fine vinegar, fit for pickling or any other purposes."

Once the homemade vinegar is made, it's time to choose a pickle recipe. There are recipes for pickled tomatoes, pickled strawberries, peach pickles, pickles a la France, pickled onions, pickled raisins, pickled cabbage, bean pickles, and sweet pickled beets—but the pickled cucumbers receive the most attention.

One recipe calls for a mixture of black pepper, cinnamon, sugar, mustard seeds, green peppers, and horseradish topped with grape leaves. Perhaps her most interesting pickled cucumber recipe though is listed fourth:

"Cut large, ripe, solid cucumbers in rings, pare, divide into smaller pieces and remove the seeds; cook pieces very slightly in weak vinegar, with salt enough to season well, drain, and put in stone jar in layers, with a few slices of onions, some cayenne pepper, whole allspice, whole cloves, bits of cinnamon bark, and celery seed (according to taste) between the layers of cucumber. Then cover with a syrup made of one pound brown sugar to one quart cider vinegar, boiled for about five minutes."

Cover and store it somewhere cool—only "in glass or stoneware" she advises—and before long, you'll have some authentic and historic Erie pickles. There are many other recipes as well and noticeably none contain dill, as dill pickles wouldn't spread in popularity for another two decades beginning in New York City's Jewish delis.

There's also a recipe for chow-chow pickles, a type of pickled relish that was a staple of Pennsylvanian Dutch cuisine (a company called Wos-Wit located in Tamaqua, Pennsylvania is one of the few still mass-producing it today).

"Let two hundred small cucumbers stand in salt and water closely covered for three days," instructs Sterrett. "Boil for fifteen minutes in half a gallon best cider vinegar, one ounce white mustard seed, one of black mustard seed, one of juniper berries, one of celery seed ... one handful small green peppers, two pounds sugar, a few onions, and a small piece of alum. Pour the vinegar while hot over the cucumbers, let stand a day, repeating the operation three or four mornings."

Mix together one-fourth pound of mustard with vinegar and dump it over the concoction before sealing and you'll have chow-chow pickles to gift to your friends and family.

I love food and I love history, so it's likely not a surprise that I've always enjoyed a little history with my meals. Food and history are intertwined and food history is an important and growing interdisciplinary field. Time after time I continue to open The Erie Cook Book and each time I feel a little more connected the Erie of the past. Other times, I simply use it as an excuse to play around in the kitchen.