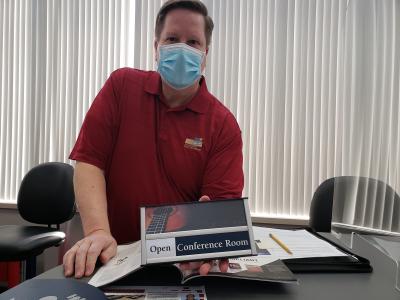 Liz Allen
This sign has a slide component to show whether the conference room is open or closed, according to Jeffrey Stewart, vice president of sales. In addition, the guitar image in the background can easily be swapped out and replaced.

When Jeffrey Stewart talks about signs, his face lights up.

That's not surprising. After all, Stewart is vice president of sales for Howard Industries Architectural Signage Systems, located at Sterrettania Business Park in Fairview.

But when he shares his enthusiasm for signs, Stewart offers more than just professional expertise. The narrative about Howard Industries is a story of successful entrepreneurship, with all the factors that entails — being a creator, risk-taker, and innovator. At Howard Industries, there's the bonus that the business has been passed from one generation to the next.

In 1928, Howard Schneider, who died in 1984, started hand-painting signs in the basement of his Rochester, N.Y. home. His late wife, Mary Moulton Schneider, was also a co-founder of the family business.

The Schneider family moved to Erie in 1941, locating the business in downtown Erie on Turnpike Street, the narrow block that juts toward West 14th Street between State and Peach. The company's website explains that with the Erie move, Schneider was "taking his chances with the relatively new technology of neon signage."

By the 1950s, Howard Signs began to specialize in "open" and "closed" signs for drive-through banks.

Gary Schneider's daughter, Tonya Pace, joined the company as operations manager 12 years ago, after owning a pet-grooming business. "I fell into it and it felt right," said Pace, who oversees the fast-growing side of the business that makes interior signs.

Gary Schneider is currently a snowbird in Florida, but Stewart, with 22 years at the company, is well-versed in his boss's business philosophy. Stewart said that Schneider likes to tell the story about his father taking him to lunch on State Street during their workday, when there were restaurants on opposite sides of the street. "His dad would tell him to look at the signs," Stewart said. Where would his son rather eat? At the restaurant with the attractive, inviting sign or at the one where the sign was "coming apart," Stewart said.

That's one way that Schneider absorbed his dad's lesson about "integrating an architectural element" into their work.

Look around Erie and you can spot Howard's functional and architecturally pleasing signs at Erie hospitals, universities, banks, businesses, nonprofits, and arts and culture venues. Many of them, including Marquette Savings Bank, Erie International Airport-Tom Ridge Field, the Barber National Institute and Glowacki Management, have a graceful arched top.

Some signs simply state the name of the business, while wayfaring signs guide visitors to their next stop — the emergency room, the delivery entrance, the parking ramp — with text and/or maps.

From the signs at the Erie Zoo, you can learn the scientific classification of an animal, where its native land is and whether it's endangered.

At Experience Children's Museum, the sign for the Discovery Corner Outdoor Classroom has at least 10 distinct colors, with the words "children's museum" in a font that resembles a kid's first attempt at printing. But sign fonts also have to be readable; fancy scripts won't make the cut.

And those aren't just any old primary colors on Howard signs. Colors can be custom-mixed to match a company's particular shade of blue, for example. "That's where the fun comes in — with the materials and the colors (and) the layouts to the design," Stewart said.

That's also where new skill sets and advanced technology come in. Draftsmen are now called technical illustrators. They must be "well-educated, highly technical people because of the graphics programs that are out there," he said. These workers must be able to make their programs "talk to the machines" that will make the end products.

Mechanical equipment is more advanced, with 3D printers performing functions that once might have required separate machines.

Erie employers have banded together for years to persuade people that manufacturing jobs don't require labor in a gritty environment. The airy factory floor I toured is the same one that workers and visitors see every day, Stewart said. "You can come in any day of the week and find the floors just as clean," he said.

Howard Industries also fosters a culture to think ahead to what comes next. When Stewart, 63, began working there 22 years ago, the company catalog was 30 pages. Today, it's 134 pages, with a separate 10-page handout for its "Essential Wellness Shields." These clear acrylic panels protect people in face-to-face encounters during COVID-19, such as at the pharmacy or the bank. The company also designed clear dividers for tables, so that people in a conference room can see each other and exchange paperwork, if necessary.

Being nimble enough to make those shields helped the business, which has 53 employees, to stay open and keep busy during the pandemic, he said.

The Americans With Disabilities Act requirements are helping to drive much of that business. Signs for exits, stairways, wheelchair access, exam rooms, restrooms and hotel pools, to name a few examples, are made with raised letters to serve those who are visually impaired, with words in Braille underneath. This is another area where attention to detail matters, because the ADA requires complying with strict rules on font size, spacing, layout, color and contrast. "That fire marshal is going to come in and say, 'Let me see your ADA-compliant-code signage,'" he said.

One of the newest products, "patient focused signage," also found more markets during COVID. Signs outside patient rooms at UPMC Hamot, for instance, have pull tabs to show at a glance if the patient has allergies, if there are visitor restrictions, or if the doctor is inside for consultation. "Tabs for patient conditions allow poor, busy nurses to do their jobs more effectively," said Stewart. "The nurses love them."

As we ease back into a normal life, Howard's patented "Perma-Banner" system may be guiding you to a festival, concert, an ethnic neighborhood, or another unique venue or event. These signs, mounted on street poles, can be permanent or seasonal. Either way, Stewart said, they won't fray and tatter the way cloth banners do. "There's no tearing, no grommets," he said.

This sign company has come a long way — from hand-painted products, to neon signs, to energy-efficient LED signs. It now makes desktop or doorway signs where the wording can be changed by using a suction cup to open up the clear cover and insert a new piece of paper. It's as simple as changing out a photo in a picture frame.

Liz Allen's youngest grandchild is blind, so ADA signage has special meaning for her. You can reach her at lizallenerie@gmail.com.

Howard Industries Architectural Signage Systems designed four panels at Erie's 9/11 Memorial at Blasco Library.
The centerpiece of the memorial is a steel column from the World Trade Center. The panels provide a timeline of the attacks and highlight the heroism of first responders, including the role of Erie volunteers. The names of every victim are embedded in an American flag.
The project was highlighted in the November 2014 edition of Sign Builder Illustrated, a trade publication.