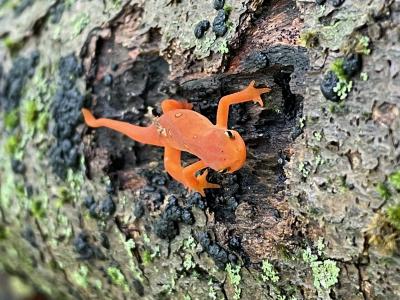 When I was a kid, I always looked forward to visiting Allegany State Park. It's about an hour from where I grew up near Buffalo, and only an hour and ten minutes from Erie. We would always stay in a cabin. You know the kind. The ones that are probably not nearly as big as you remember them being, though they play an outsized role in your memory. At night, we would try to attract raccoons to our cabin with marshmallows from the campfire. Most people try to avoid creatures like that. We hoped to encounter them.

Covering 65,000 acres, Allegany is filled with cool critters, including white-tailed deer, black bears, and the rare spiny softshell turtle. But if you look a little closer in the right places, you'll find some special amphibians, too.

One of those places is Thunder Rocks. This unique geological formation was crafted by Mother Nature approximately 165 million years ago due to a number of factors (but not glaciers). It features more than 25 massive rock structures that you can climb on (well, the smaller ones). The sprawling sedimentary rocks are dotted with white stones that look like tiny eggs. Plus, Thunder Rocks is home to a variety of Appalachian plant species that are quite uncommon in Western New York.

A friend told me about Thunder Rocks and we visited for the first time last year. It was my wife and I, our four adventurous kids, and my parents.

As we were having a great time exploring the rocks, my intrepid son, Nolan, came upon a startling discovery. A tiny, bright orange amphibian that was out and about, traversing the rocks as we were. It was an eastern newt. We were all really excited to see this little guy. And this one discovery set off the Great Newt Search of 2020.

We started looking to see if we could find another newt. As it turns out, there were plenty. My kids found them. My wife found them. My mom. Even my colorblind dad. Me? Nope. I looked hard and found nothing. I turned over log after log. I went deep into the forest, determined to find a newt. I came up empty.

Here's the cool thing about eastern newts that we learned from this. The little orange fellas we were finding are actually juveniles of the species known as red efts. They live on land for two to four years. Then, remarkably, their color darkens and their tail grows flatter as they return to ponds and streams as adults. So they go from landlubbers to water-dwelling. Basically, a reverse Little Mermaid.

This was fascinating to learn because when we weren't trying to attract raccoons as kids, we were looking to catch newts in the nearby pond. They were brown and yellow, so apparently those were the grown-up version of these newts. This blew my mind. I thought for sure these were two different species entirely.

Since I was shut out on the first Allegany trip, we returned a second time last summer. Once again, my wife and kids found newts, while I came home empty-handed. At this point, I was starting to feel cursed. Why was I so bad at this?

But this June, the third time was the charm. I was determined to end my sad streak. By moving slowly and carefully examining my surroundings, I finally did.

I should mention that the timing of your visit likely makes an impact on whether you'll see newts. A recent rainfall that has the forest floor damp seems to be ideal.

It's heartening for me to know eastern newts seem to be populous in Allegany. Because globally, the picture for all amphibians is becoming bleak. Chytridiomycosis, an infection caused by the chytrid fungus, has spread rapidly and decimated amphibian populations in more than 60 countries. The global pet trade has played a role in the spread of the disease, which is exacerbated by climate change. No effective measure is known to control the disease in wild populations. Chytridiomycosis has caused declines in more than 500 frog and salamander species.

Amphibians have always been close to my heart. Learning that their numbers are dwindling all over the planet saddens me. When we were kids, one of the highlights of summer was our annual frog race. Just imagine leopard frogs and bullfrogs navigating an obstacle course. You could say we didn't get out enough as kids, though maybe we got out too much.

But it's not too late to help amphibians. For starters, don't use pesticides in your yard. That kills amphibians and the insects they eat. Give frogs, toads, newts, and salamanders a place to live. Don't waste water, and help protect the wetlands in your region.

Allegany is New York's largest state park, and it's open year-round. Plus, the park is celebrating its centennial, so it's a fitting time to stay in a cabin, campsite, or cottage. Every time we go, we never have enough time to do all the things we'd like to. That's the mark of a good place.

I should add that Red House Lake in Allegany is a terrific place to go fishing or boating. There's a nice kayak and canoe launch on the main pier, too. During our most recent visit, my daughter Bridget slipped off the dock, but fortunately, all those swimming lessons came in handy. Maybe she was taking to the water to emulate the eastern newt.

We're lucky to have another state park like this in our region. You don't need to go to a tropical rainforest to see extraordinary amphibians. Just trek out to Thunder Rocks. If you're lucky, you may observe some remarkable, shape-shifting newts — though it may take a few tries.

That's the beauty of nature. It happens all around us, whether we can see it or not. Slow down and take a look for yourself.

Jeff Bucki is a copywriter at Delaware North and a freelance writer for the Buffalo News. His work has appeared in Buffalo Magazine and Discover Magazine. Visit JeffBucki.com