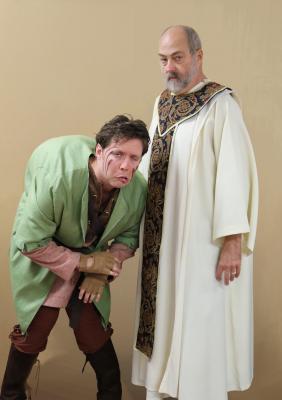 Amisshapen, deformed bell-ringer, a beautiful, compassionate Roma woman, and a vengeful minister of justice converge in Paris in a musical retelling of Victor Hugo's gothic novel The Hunchback of Notre Dame.

The Erie Playhouse is bringing this tale to their downtown main stage, with 11 showings throughout the month of August, and a varied cast that includes Playhouse veterans and newcomers alike. Set in the early 1500s in Paris, Hunchback loosely follows Hugo's plot, centering on the life of protagonist Quasimodo and his yearning to experience life beyond the cathedral's bell tower, to which he is confined. A moment of courage, which compels him to step out among the people of Paris during a lively festival, brings the dancer Esmerelda to Quasimodo's rescue, while exposing her to the evil offices of Frollo, into whose care Quasimodo was relayed as a baby.

If this sounds familiar, despite a lack of exposure to 19th century French literature, there is a good chance you saw the 1996 animated film adaptation of the novel, produced by Disney, and upon whose songbook the musical is based — and has been expanded, with nine new songs (which did not appear in the movie) composed by the film's musical team of Alan Menken and Stephen Schwartz. Hunchback was actually written in English, but translated into German for its first set of performances in Germany, where it ran for four years. It wasn't until 2014 that the musical began to be shown in the United States.

The Playhouse's principals include Will Steadman as Quasimodo, Jeff Lipiec as the villain Frollo, Domenic del Greco as the soldier Phoebus and, making her Playhouse debut, Amelia Wisinski as the tender-hearted but fierce Esmerelda. — Cara Suppa