If You Like to Read, Will Likes to Write

A look at local author Will Isaac 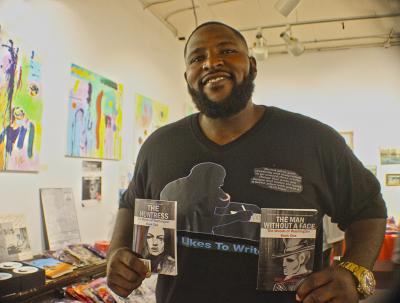 Nick Warren
Local author Will Isaac poses with two of his previously published horror stories, The Huntress and The Man Without a Face. Isaac founded his publishing company, WillLikes-To-Write in 2017.

Will-Likes-To-Write is a local publishing company that was founded by local author Will Isaac. He started the publishing company in 2017 with goals driven at providing his audience to experience an escape from the real world as they dive into his fantasy and fiction literary works.

"This is who I am, this is what I do," expresses Isaac. Drawing inspiration from Disney movies such as The Lion King and The Hunchback of Notre Dame, Isaac creates stories that leave you rooting for the main character while you journey through their ups and downs. His passion for writing is shown through each story as he also uses experiences from his own trials and tribulations in life, such as in his first book The Sondian - The Killing of a Chief.

The creation of Isaac's company also came out of a desire to be his own boss, being an extreme goal chaser, and love and motivation from his loved ones — primarily his wife and two daughters. His oldest daughter is even following in his footsteps as she is already a published author herself at the age of 13.

Now with the recent release of his first horror series, "The Woods of Washington," Isaac introduces two horror stories, The Man Without a Face and The Huntress, with tales that turn our natural environment into something terrifying. The release of this series was held at PACA's "Attack of the PACA, Comes Back(A)" in July, where Isaac was able to sell a wide selection of merchandise as well as his books, provide a live showcase of his horror series, and meet and greet with his newly found fanbase.

Since the release, Isaac has been busy participating in a variety of popup shops including at Keyz Bazaar and The Tipsy Bean. He will also have a spot at this year's ComiCon Erie, which is something Isaac has always wanted to be a part of. All of this had been made possible with the much-needed creative help from his illustrator, Walter Smith Jr. Meeting one day at the gym, the two have now become a dynamic duo, with the ability to create works that catch the eye and make you want to keep reading. With the help of other very important team members, they combine talents and enrich one another's quality of work throughout the process.

With plans to move from literary works to audiobooks, to soon to come short films, Isaac isn't limiting his growth of this one-of-a-kind local publishing company. Isaac's main message to all of his readers is to "not allow your creativity and imagination to go unused, these are the things that make you unique and make the world a better place with you in it."