Get ready folks, this one's a doozy. If you haven't yet heard, the grand jury in Ferguson has come to a decision, Buffalo is preparing for floods, and a young man in Erie threatened a college. History is being made every day, so we've rounded it up for you, in case you missed it. 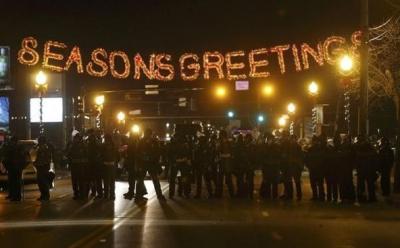 Colosseum Vandal Fined $24,000
A Russian tourist has been charged with "aggravated damage" after carving the letter "K" into a wall of the Colosseum in Rome the other day. The charges carry with them a $24,800 fine. According to spokesperson from the Colosseum, the graffitti has compromised the ongoing conservation efforts.

Ferguson Grand Jury Reaches Decision
The grand jury involved in the investigation into Darren Wilson has decided not to indict the officer. After receiving the news, the group of protestors began getting upset. After a few protestors attempted to flip a police car, officers began firing rounds of tear gas into the crowd. Upon the dispersal of the crowd, looters and rioters took to the streets. Multiple buildings were set ablaze, including an auto parts store and a Little Caesar's pizza shop. Though he has been charged with no crimes, it is unclear what lies ahead for Darren Wilson. Though it would be possible for him to resume his position in the Ferguson Police Department, it is assumed he will not.

Get full coverage as the events unfold at cnn.com

Buffalo Prepares for Potential Flooding
After receiving a whopping seven feet of snow over the past few days, Govenor Andrew Cuomo has told the residents of Buffalo to prepare for flooding. As the massive amounts of snow melt, they could potentially create massive flood waters. This is coupled with the fact that much of the snow contains sewage and runoff of varying sorts, making the melting snow a "toxic brew", according to Cuomo. Buffalo citizens have been urged to prepare for exacuation in the event of flooding.

Man Stabbed on East Side
A man was taken to UPMC for stab wounds to the leg following an attempted robbery in the 500 block of Ash and Wallace last night. The victim stated that a young Hispanic man approached him and demanded money from him. The victim then reportedly punched the suspect in the head, afterwhich he was stabbed in the leg. The police currently have no suspects, but the victim described him as a Hispanic man, about 20 years old, 5'9" and around 150 pounds.

Erie Man Threatens Allegheny College
A 21-year old man was taken into custody Sunday night following a stream of threatening Facebook statuses. The statuses involved direct threats to the "people" at Allegheny College and claims that the young man had become a god. The young man was taken into custody after Erie Police were notified of the threats. When officers arrived on the scene, Crisis Services was already there. The man is receiving treatment at Saint Vincent Hospital.