Five news stories you should know about, including militant attacks in Nigeria, another paper targeted over cartoons, and the NAACP bombing investigation. We're back, in case you missed it. 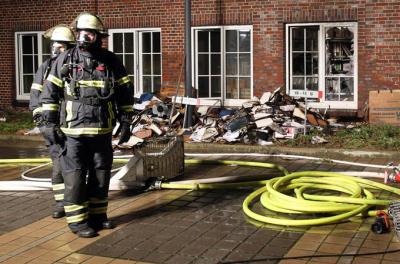 The scene at Hamburger Morgenpost [aljazeera.com]

Boko Haram Massacre in Northern Nigeria
Radical terrorist group Boko Haram opened fire in several villages surrounding the town of Baga in northern Nigeria last weekend. As the dust settles, officials are attempting to make sense of what has happened. According to some first-hand reports, terrorists drove in with armored vehicles and trucks and began spraying bullets. When villagers ran, the attackers reportedly pursued on motorcycle, ultimately killing close to 2,000 and razing many homes and buildings. At least 30,000 people have been displaced. Boko Haram is a radical Islamist group that was responsible for the abduction of over 200 students in April. The United States has formally condemned this act.


Hamburger Morgenpost Target of Arson
A daily tabloid paper in Hamburg, Germany, was the target of an arson attack yesterday. According to police reports, rocks and a burning object where thrown into the windows of the Hamburger Morgenpost yesterday around 1:20 GMT. The attack came after the paper released an issue with three Charlie Hebdo cartoons on the cover with the headline "This must freedom must be possible!". There were no injuries and damage was minor. Police have also reported that they have two suspects in custody and are conducting an investigation. Despite the seeming similarity between this and the Charlie Hebdo attack in France, officials say it is too early to know for certain of a connection between the two.

Feinstein on Petraeus: "How much does government want?"
Senator Diane Feinstein (D-CA) has stated that the government has made an error in recommending charges be placed against Gen. David Petraeus regarding his leaking of classified information to his mistress and biographer. While agreeing that the leaking of information was in deed wrong, Feinstein said that Petraeus should not be charged criminally for his actions. "It's done, it's over. He's retired. He's lost his job," Feinstein said.This statement comes on the heels of a statement issued by Senators John McCain (R-AR) and Lindsey Graham (R-SC) calling the handling of the Petraeus investigation "grievously mishandled". McCain then condemned the leaking of the information to The New York Times, claiming that, "...those things that are leaked to the media are done so by people who are not in the position to know, and are frequently inaccurate."

NAACP Bombing May be 'Domestic Terrorism'
An FBI investigation is being launched following a bombing near the NAACP building in Colorado Springs on Tuesday. At this stage of the investigation, the FBI is hesitant to call this a hate crime, at least in part because the building that was attacked does not hold only the NAACP. The explosion actually occurred at a salon next door, though the shop's owner believes that the building was targeted for racial reasons. The NAACP in Colorado Springs has been the target of multiple attacks over the past few years, according to one spokesman. The investigation is ongoing.

Watch the video on cnn.com

Read the full story at yourerie.com