It's Thursday and the week is almost over, but that doesn't mean news has stopped happening. Sailors were attacked, sex crimes were uninvestigated, and there might be a new roudabout in Waterford. All the and more, in case you missed it. 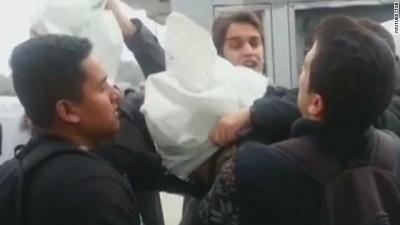 Bag being placed over a sailor's head

World
US Sailors Attacked in Turkey

While ashore in Istanbul yesterday, three US Navy sailors were attacked by protestors. The assailants, later revealed to be members of the Turkish Youth Union, threw objects at the sailors, sprayed them with red paint, and finally assaulted them and placed bags over their heads. The sailors were chased down the street, followed by a large group of protestors. The Turkish government has condemned their actions, claiming that it does not accurately show Turkish hospitality.

A report was released claiming the over 1,000 sex-related crimes had gone uninvestigated over a three-year period in New Orleans. Five detectives were examined in the report, though their names have not yet been released to the public. One case in particular involved a two-year old toddler that, after an alleged sexual assault, contracted an STD. However, the case was thrown out because the toddler "did not disclose any information that would warrant a criminal investigation". The report has been handed over to the NOPD Public Integrity Bureau.

After a fire broke out in his Butler County home, a fourteen-year old boy sprung quicly into action. Neighbors reportedly saw him carrying his five dogs out of the burning building in their crates. Soon after, when the fire department arrived, they saw the boy using a nearby garden hose in an attempt to control the blaze. Though the exterior of the house was badly burned, the fire department stated that his efforts helped prevent more serious damage. The local fire marshall is investigating the cause of the fire.

Citizens had the opportunity to voice their opinions at a public meeting with PennDOT yesterday concerning the possible construction of a second roundabout in Waterford. The proposed roundabout would alter the Route 97, Route 19 intersection. The citizens of Waterford were opposed to the roundabout proposal, stating that installing two traffic lights would be cheaper, easier, and would lead to less accidents. Most of the public stated that the previous roundabout that was built in Waterford was a waste of money, a difficulty to drive through, and caused more accidents. Though PennDOT still seems to favor the roundabout proposal, they stated that construction would not start until 2017 eith way.

Frederick Schimp was found guilty yesterday of both failing to stop at a stop sign and careless driving in relation to his involvement in the fatal car accident that killed Donna Platz last July. Schimp was driving a police cruiser on Route 98 in Fairview when he ran a stop sign and struck Platz. Though the defense plead guilty to failing to stop at a stop sign, they claimed the state did not have enough evidence to prove Schimp was driving recklessly. However, Judge Manzi seemed to have enough evidence to convict Schimp. The charges carry a $500 fine and a six month license suspension, which could cost Schimp his job.