Frederick Wiseman's appropriately-titled 2015 documentary In Jackson Heights takes an intimate look at the diverse group of people who live there. 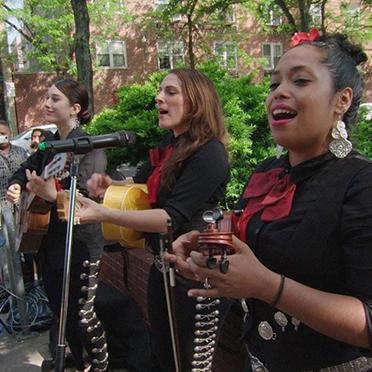 Few places in the United States better exemplify our nation's status as a "melting pot" than Jackson Heights in New York City. It is estimated that 167 languages are spoken in this little neighborhood on the northwest end of Queens. Frederick Wiseman's appropriately-titled 2015 documentary In Jackson Heights takes an intimate look at the diverse group of people who live there.

Clocking in at over three hours, In Jackson Heights finds its way into an impressive array of local niches. Expect anything and everything – a visit to a halal supermarket, a lesson at a school for cab drivers, a city council meeting, a gathering for the LGBTQ community, and so forth.

Don't expect a lot of editorializing along the way. Wiseman is known for his minimalist approach to documentary filmmaking – no voice-over narration or talking-head style interviews. Instead, he offers a deliberately arranged collage of everyday life. The real world as filtered through the lens of a world-renowned director.

The threat of gentrification looms over his film. Rents are expensive throughout New York, and inequality continues to threaten the vibrancy of its many communities.

If Wiseman's legacy eludes you, you're probably not alone. Although In Jackson Heights is the 86-year-old director's 42nd film, his work rarely finds the wide audiences that people like Errol Morris or Ken Burns often enjoy. For example, Wiseman's most applauded (and infamous) film, 1967's Titicut Follies, went more or less unseen for 40 years. The documentary, which takes an unflinching look at everyday life among inmates at the Bridgewater State Hospital for the criminally insane in Massachusetts, was censored following claims that it violated the rights of the inmates. Many believe that the film was actually banned due to its exposé of harsh living conditions, and it wasn't legally screened in public until 1992.

In Jackson Heights most likely won't cause that level of controversy, but don't expect a stroll through town with a kindly old man, either. As Wiseman explores the neighborhood's eccentric character, the threat of gentrification looms over his film. Rents are expensive throughout New York, and inequality continues to threaten the vibrancy of its many communities. In Jackson Heights acknowledges the good and the bad, observing both with focus and wonder. – Dan Schank