Medieval play explores the meaning of life in this contemporary adaptation 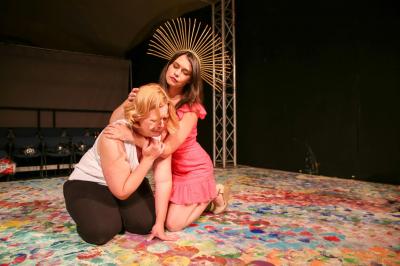 Nicole Lossie
Jade Mitchell consoles Leslie Ford in the Dramashop production of Everybody.

"What comes after?" is a question most of us have asked ourselves when wondering what happens after death; as morbid as it sounds, it is the only guarantee in life. So what happens when we explore that question more fully, considering our own mortality and the meaning of life?

That's where Everybody comes in. Written by Branden Jacobs-Jenkins, the play is a modern twist on Everyman, a medieval morality play adapted from a Dutch play by an anonymous 15th century English writer. These types of plays became popular in the late Middle Ages, beginning as religious allegories meant to teach the audience a moral lesson.

Jacobs-Jenkins' play follows a similar trajectory as the source material, minus the heavy reliance on religion. Yes, his piece still includes the characters of God and Death — key players in the original — but Jacob-Jenkins' is more interested in the uncertainty and unfairness of death.

The play follows titular character Everybody on their journey alongside Death through life's greatest and most enigmatic mystery — what is the meaning of living? Along the way, they encounter others — such as Kinship, Cousinship, and Stuff — whom Everybody interacts with when trying to find a companion for their journey.

The premise of the performance gets better: each performance will likely be different from the rest, as the person set to play main character Everybody is chosen by random lottery each night from a group of five actors. While key characters like God and Death remain the same person throughout the show's run at Dramashop, each performance will offer its own unique telling, giving each audience their own one-of-a-kind performance.

Originally slated to be performed two years ago, Dramashop is proud to present Everybody, calling the timing "better late than never" — their words, not ours. In the wake of a pandemic, the timing of a piece that challenges preconceptions of death and makes people question their own morality and mortality seems more appropriate than ever.

Everybody by Braden Jacobs-Jenkins