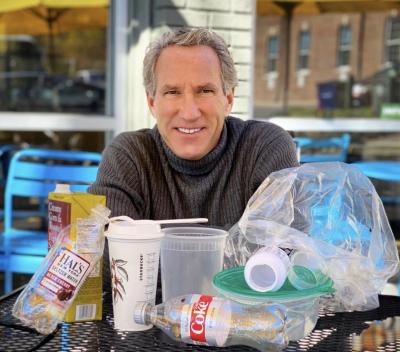 On the heels of Wabtec's looming layoffs is a glimmer of good news in the world of manufacturing in Erie.

International Recycling Group (IRG), a New York City-based startup, will soon be setting up shop in the Gem City. The group will build what it describes as the world's largest plastics recycling facility at a price tag of $100 million.

I recently had the opportunity to talk to the founder and chairman of the group, Mitch Hecht, who will soon be an Erieite himself; anticipating his move in mid-November. "I signed a lease in an area in the city known as OWB [Our West Bayfront]. Coming from New York, where we have Soho, Doho, and all these little nicknames, I thought the OWB was cool."

IRG's CEO will soon be moving to Erie as well. Chris Dow hails from down under. He currently resides in Melbourne, Australia, but COVID has delayed his move.

How Erie came to be was somewhat serendipitous — a mix of the right location, right time, and a sprinkling of investment (a combined $9 million from Erie Insurance and Erie-based Plastek Group) didn't hurt either. IRG plans to be at full commission by the end of 2022, with 50 new jobs — and a hopeful future expansion that could increase employment to more than 150.

"We plan to break ground beginning of next year and then hopefully by the end of 2022 it will be completed. It's roughly an 18-month development," says Hecht.

The group was first introduced to Erie by the way of Erie Insurance, when they saw on the news that EIG had established a $50 million opportunity zone fund. "That was of critical importance to learn about because the toughest financing that you need to raise always is something called pre-development funding, but it's really the seed capital that we needed to finalize development of a plan."

In looking at the location on the map, he then realized Erie was in a prime position. "Erie is literally 40 miles to the south of where we need to deliver our clean material to a steel company up in Nanticoke, Ontario."

Hecht had been working with CapZone, a group that had previously committed funding to Erie, about how to try to access the opportunity zone funding. He then called up the CapZone CEO Al Pachula to talk about Erie Insurance. "I found out they had a meeting with them the following week and he invited me to join. So I did."

"[Erie Insurance] told me they wanted to develop the next generation of industry in Erie, and we think recycling is perfect — adding that in fact, there was a huge downstream plastics economy that could be natural customers for our recycled post-consumer resins."

IRG was then introduced to Plastek Group and Penn State Behrend, which has one of the largest undergraduate polymers research institutes and programs in the country. "And within weeks there was a whirlwind of meetings with several groups and it just was so obvious that this was a perfect fit for where our business needed to be."

What was born from that was a handshake deal in January, and then an arduous due diligence process and final completion of the transaction.

"When COVID hit and I thought, everybody's going to take the opportunity to either cancel the deal because of the economic uncertainty, and the world will just stop investing in things, and businesses will be shut down. But by the time we closed on our transaction in August, the handshake deal that we had in January with Erie Insurance and the Plastek Group was exactly the deal that resulted after all the legal documentation was done. Incredible kudos and credit to the integrity of everyone involved in the transaction."

According to the Environmental Protection Agency, in the United States, only about 7 percent of all plastics that enter the municipal solid waste stream are recycled. As noted on their website, the goal of IRG is to find value in every part of post-use plastic. Combined with plastic scrap generated by industrial and commercial industries, the group estimates that annually, over 50 million tons of plastic scrap are destined for landfills. Their technology will be able to accept all types of plastic—not just bottles. Thus, this "single streaming," or the combination of all plastics into a recycling bin, will now become a reality.

But as for how one gets into the plastics recycling industry to begin with?

"My partner [Doug] and I came out of the steel industry. I was looking for ways to reduce our fuel costs for coal. By accident, I came upon this article that Japan and Western Europe were taking waste plastic that they didn't have a recyclable application for — because they don't have landfills — and they were getting rid of it in the blast furnace of steel mills because it's a zero-oxygen environment in extremely high temperatures."

Zero-oxygen environment means no burning — and no combustion.

"It's really just eliminating plastic by vaporizing. Getting rid of that material was an ideal way to remove a lot of plastic from a landfill or the waste stream. When I looked at it, I thought, we've got more waste plastic going to landfills in this country than anywhere in the world on a per capita basis, why aren't we doing that here?"

His research found that coal was so cheap in the U.S. that one needed government subsidies to support such a program at the time because the steel operator would rather take coal.

"You couldn't manufacture the material for it to be cheap enough where you make money, or you could cover the cost. That was in 2004."

But in 2007 things changed. "All of a sudden, coal prices went from being incredibly cheap now to shooting through the roof, because all of the fossil fuels coming out of China. All of our raw materials were skyrocketing. And at that point, I realized coal now used by a steel mill was more expensive."

That's when Hecht started knocking on the doors of the guys in the North American steel industry that he used to work with.

"They said, if you can make a material that is clean and energy consistent, we'll buy every ounce of it that you can make. So that's how it got started."

Mitch said he expects that uses other than steel mills will be found for all grades of plastic.

"Our model is really intended to create a bridge. Our goal would be to send material (to a steel mill) only if we can't find another market for that material. That would be our long-term goal."

It's the classic chicken and the egg.

"Many plastics don't have a recycling application because nobody is collecting those plastics efficiently because there is no market for the material. So, the question is, how do we get from 10 percent recycled recovery of all plastics to 90 percent of recovery and turned back into products? The only way you can do that is creating a box where we're driving every single type of plastic and resin."

But in October the group had signed a memo of understanding with Canada-based steelmaker StelCo Inc. IRG will plan to sell the company a proprietary blend of plastics that has a high energy value that can be used to offset coke in the production of iron oxide.

Hecht believes those markets will continue to develop.

"And then we'll start pulling the material away from the steel mill and start providing the material to the recyclers. Our goal is that we go from 90 percent landfill today of plastics to 90 percent recycled plastics." A lofty goal — one that Hecht believes will take upwards of 15 years — but one that would provide a positive environmental impact for generations to come.

Hopefully through this initiative, Erie will play a small role in not only saving a part of the environment — but helping our community grow in tandem — with the help of a little startup from New York City.

Rebecca Styn is the proprietor of Room 33 Speakeasy. She is also VP of Ventures at Erie Innovation District and recently completed her Ph.D. in Leadership and Organizational Learning from Gannon University. Follow Room 33 on Facebook @room33speakeasy, and follow Rebecca on Twitter at @rstyn.