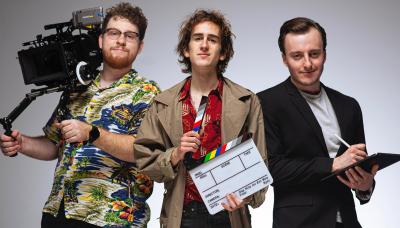 Simon Yahn, Danny Pakulski, and Liam O'Brien make up Oddity Productions; an Erie-based creative filmmaking and advertising company hoping to create a new lens for the Erie film scene. Formed in 2017, whilst the three were just college Freshmen, striving to bring a fresh approach to Erie film and advertising centered around the belief of "the power of stories.''

They have since implemented creative storytelling into ads for Erie companies; such as Erie Brewing Company, Altered State Distillery, and the Presque Isle Partnership. These collaborations have showcased that the budding entrepreneurs are already extremely capable of providing premier content for tasteful and effective marketing to encapture the consumer.

Pakulski serves as the creative head of Oddity – the company's resident writer and director. Yahn oversees the technical aspects as their cinematographer and editor, while O'Brien serves as producer, heading the business aspects of the group.

Their current project, entitled Alexander The Brain, explores the subject of how violence and toxic masculinity intertwined to cultivate the rising popularity of bare-knuckle boxing in the post-Civil War era. Oddity Productions describes it as "a psychological thriller that dives into the mind of Alexander Conroy, a bare-knuckle boxer in the 1880s who is poised to gain a lot of power in his city if he wins an upcoming fight. An opposing gang leader will do anything he can to stop him." Erie TikTok influencer, multimedia artist, and entrepreneur Jake Ames has been cast to play the leading role of Alexander Conroy. Ames had caught the attention of Pakulski and O'Brien with his viral Peaky Blinders-themed TikToks; the videos gaining Ames over 200K followers and 3.9M likes on the platform.

Louis Geramita of the Aspiring Gent Podcast, Primo Tailoring, and Issac Baker has been selected to be head of wardrobe. An expert tailor and what some may label as a fashion connoisseur, Geramita is the ultimate fit for designing, sourcing, and tailoring the wardrobe for the cast. Kiran Shah and Eli Buhl of 3 Elements MMA gym are stepping up to fill the roles of fight choreographers to ensure the boxing matches in the film are historically accurate.

Jack Levin (a Penn State finance and business law major) has been brought on as an associate producer to assist with budgeting, fundraising, and providing hands-on support during shoots.

The Indiegogo fundraising campaign was launched on January 15th with a goal of $20,000; within 5 days the campaign was trending and was ranked #1 in the films category, having raised nearly 20% of their budget. "We love making films, and we dream of a vibrant film scene in Erie where more passionate artists have the platform and means of contributing to the film community. We hope to bring more interest and awareness to Erie's film community through our work, and look forward to collaborating with more of Erie's creatives," says O'Brien. Oddity Productions has planned ahead to ensure the production of the film will be as safe as possible; precautions and requirements include but are not limited to negative COVID-19 tests for cast and crew, provided PPE for all involved that must be worn at all times by crew and any cast that are not on camera. OP plans on sending their film to over 20 film festivals nationally and abroad. If you haven't heard of Oddity Productions yet, you have now.