Is Fracking for Natural Gas Coming to Erie County?

Maybe, but not without a real power struggle. 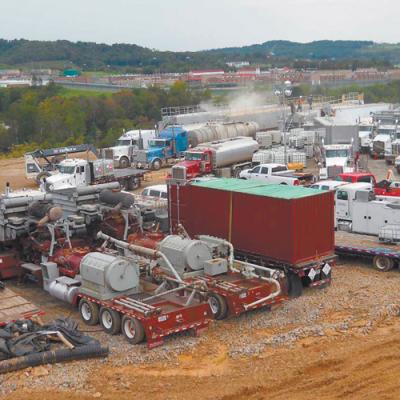 Gov. Tom Wolf says that fracking is coming, and that it can be done safely. Environmental groups say that it is not safe for people, animals, or the environment, and fear its arrival. World leaders say that it must stop, because the future of life on our planet depends on it.

Just what is fracking, anyway? It comes from the word "fracturing," as used in drilling for natural gas in shale layers. Fracturing has been used by drillers for about 80 years now, in vertically drilled wells, to increase the amount of gas released.

When the drilling tube reaches the shale layer, a mixture of sand and water is hydraulically pumped into the shale under very high pressure, breaking up the shale. When the pumps are turned off, the sand helps to hold the cracks in the shale open, releasing the gas to flow back up the well pipe. For vertical wells, only a few hundred gallons of water is needed, because the shale layer is usually only about 40 feet thick.

However, in 2004, an innovative new drilling technology was invented which allows the drillers to steer the drill head when it reaches the shale layer, and to then drill horizontally – not for just a few feet as with vertical drilling; but for thousands of feet, even miles, following the shale layer.

This technique was dubbed "Unconventional Horizontal Hydraulic Fracturing," and here in Pennsylvania it was used in the Marcellus shale layer to extract a thousand times more natural gas per well than could be extracted from a vertical well.

But to frack even 5,000 feet of horizontal shale, about 5 million gallons of water are needed, along with sand and special proprietary lubricating chemicals. When the fracking pumps are turned off, the gas and over a million gallons of the fracking fluid come gushing back up, contaminated with toxic minerals and carcinogenic vapors. This hazardous wastewater must be contained and shipped by truck to a legal disposal site.

Some producers are now capping new wells until the prices recover to pre-fracking levels. When that happens, the floodgates will open, and Erie County will see an invasion of frackers.

This new unconventional drilling – called "fracking" for short – rapidly became popular here in Pennsylvania because of our abundance of Marcellus shale. There are presently 15,786 of these wells with DEP permits in our state. This has resulted in a glut of natural gas, and prices have fallen by over 50 percent. Some producers are now capping new wells until the prices recover to pre-fracking levels. When that happens, the floodgates will open, and Erie County will see an invasion of frackers. Which brings us back to the question: "Is fracking for natural gas coming to Erie County?"

The following are some "Yes" signs:

– Erie County geology shows abundant Utica shale at a depth of about 6,000 feet with a thickness of 200 to 400 feet, very favorable for horizontal drilling and fracking.

– The conversion of coal-burning power plants to natural gas fuel is being encouraged to help comply with the Clean Air Act and to reduce CO2 emissions.

– Natural gas production drilling operations are moving north rapidly. Washington County, in the southwestern corner of Pennsylvania, was developed to have 2,136 permitted wells because of the easily available Marcellus shale there. Erie County could see that kind of development into our Utica shale layers. Nearby Butler County already has 771 permitted wells, Mercer County has 100, Venango County has 17, and Crawford County has six. There are two wells producing natural gas located in Crawford County between Meadville and Cochranton (Staab 1H and Lippert 1H fracked in 2012), and two south of Conneaut Lake (Byler 3HD and 4HD fracked and flared in 2013 but capped for future use in 2018).

– Since 2012, Erie County landowners have signed 354 oil/gas leases to 12 different gas developers as of Feb. 2016. They are just waiting for the price of natural gas to recover and fracking companies to move in.

The following are some factors that indicate "No" to fracking in Erie County:

– One local Pennsylvania lawmaker, Sen. Sean Wiley, is in favor of a moratorium on fracking in the Lake Erie watershed. [See Sen. Wiley's "Harrisburg Happenings" in this issue for more information. – ed.]

– Local environmental groups including the Sierra Club oppose fracking here, and many statewide anti-fracking groups want a moratorium on any new fracking in Pennsylvania.

– World leaders, scientists, and even Pope Francis are deeply concerned that we have to stop the use of fossil fuels in order to prevent disastrous climate change effects.

– Medical data now surfacing indicates that there are serious health risks to families living in areas where fracking operations are conducted.

– Once landowners understand the reality of fracking operations, they may decide not to enter into drilling lease agreements with developers. To complete one well involves 16 months of 24-hour per day, seven-days-a-week noise, trucks, and nighttime lights, as well as angry neighbors.

What do you say? Yes or no? Learn more about it on June 7th at a free showing of the film Dear President Obama, and then an open discussion about fracking in Erie County at Erie's Blasco Library Hirt Auditorium at 7 p.m. Think about joining the Clean Energy Revolution, and becoming a member of one of our local environmental organizations.

Sam Miller, MSEE, is an electrical engineering graduate from Gannon University, and received his masters degree from NYU/Poly. He is now retired, lives here in Erie, and is active with the local Sierra Club and the community group Our Water Our Air Our Rights. He can be reached at bearwalker33@roadrunner.com.

Find the Sierra Club Lake Erie Group at lakeeriegroup.webs.com or on Facebook. Find Our Water Our Air Our Rights at ourwaterourrights.org or on Facebook.