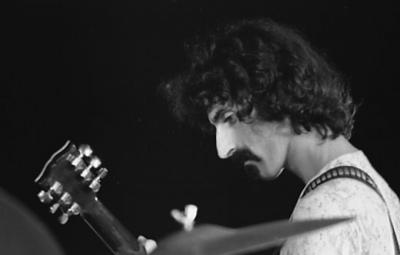 Zappa/Erie was released in June of 2022. It's a collection of performances by Frank Zappa from the times he played in Erie and Edinboro, a box set spanning six discs and featuring a full color hardcover book. The anthology includes the May 8, 1974 performance at Edinboro State College, the November 12, 1974 concert at Gannon Auditorium, and the November 12, 1976 performance at the Erie County Fieldhouse. The reason for such a groovy release with a distinct local tie is due to the fact that the Zappa vault "Meister," Joe Travers is from the Gem City. Travers is a Grammy award-winning drummer (which he won for his performance of "Peaches en Regalia" with Zappa Plays Zappa). He has gone on to play with The Zappa Band, Zappa Plays Zappa, Duran Duran, Billy Idol, Lisa Loeb, Joe Satriani, and Rich Robinson of the Black Crowes, among many others.

Joe Travers started playing drums from an early age and after years of practicing the drums and ended up playing in Z, a band featuring Zappa's sons Dweezil and Ahmet. He entered the fold as a musician and fan, but it was his knowledge and respect for the Zappa catalog that impressed the family and landed him the role of the Vault Meister for the Zappa estate. He talked with me about how the pandemic gave him an opportunity to explore the tapes recorded in his hometown.

"I knew the tapes were in the vault, but never really took the time to document them," Travers said. "It's kind of funny to think that, wow, you are from Erie and you knew they were there. I was curious but I never really came around to them until the pandemic happened and I had a lot of extra time. I thought, I am finally going to get around to these. So I spent the time digitizing all that stuff, and realized that they were good shows. With me being a part of the family for so long, I thought this would be a really cool idea to lump them together. So I hit Ahmet up with it and he was really into it, and now it's a reality and it's out there."

With a collection as massive as Frank's, one that spans decades, you run into all sorts of media that performances were recorded on.

Travers explains how he transfers those performances into the digital format, especially when time affects the quality of the tapes: "When it comes time to release them, you have to remember that there was only one tape machine rolling, so the engineer in real time is changing tape, while the band is still playing. So, it's important to have some reel backup shows from that time period transferred as well, so that if there is a section of song that's not a solo and an actual passage of written material, you can grab that from another show and insert it in for continuity."

He continues: "If it is a solo, I just find the right edit point in time to join them so it's seamless and you would never know, unless there was a bootleg of the show out there. So, that's the secret of getting those tape gaps taken away. However, what happens when it comes to those four-track tapes, you are pretty much married to that sub mix that engineer made at that time. You don't really have a lot of options, you have a stereo mix on channel one and two, then on channel three you would have either an isolated bass guitar or you would have an isolated guitar track, or an isolated audience track for ambience, and that's all you really have. It changed from engineer to engineer and from tour to tour, so you end up sending it to a mastering engineer and supervising them to ensure they're doing the right thing."

When asked about the condition of the Erie tapes, Travers said, "They were great, all of them, the Edinboro show and both Erie tapes were all playable and didn't need to be baked. There were zero problems".

Zappa's performance at Edinboro University was a widely bootlegged performance among fans for years. The songs "Son of Orange County" and "More Trouble Everyday" were even commercially released on the 1974 live Zappa/Mothers album Roxy & Elsewhere, but the whole show hadn't been released until now. It's a lineup of musicians that Joe Travers says is one of his favorite variations.

"I have to say that band, at the Edinboro show, that is a band that really wasn't featured much by Frank, only about 10 minutes of material on Roxy & Elsewhere features that group…and that group is unbelievable," Travers admitted. "The arrangements changed so much for that particular tour with the layers the Fowler brothers, Jeff Simmons, and Don Preston added. That 10th anniversary band was a really, really special band, and it's one of my favorites because of all that instrumentation added. Frank was such a genius at molding all those different sounds, all those different instruments to make an unbelievable sound. His arrangements were so genius and that concert shows them off a lot."

Frank Zappa would only return to Erie two more times, playing at Gannon University and the legendary Erie County Fieldhouse, facing issues that most touring bands have. Nonetheless, they still put on memorable performances. "He only played Erie a few times and I don't think it was the best experience for him the both times he played there. The first time he was sick and the crowd was kind of disrespectful," Travers reasoned. "The next time that he played it was a horrible snowstorm and half the equipment didn't show up, so they had to rent the equipment and all that stuff. Then Crack The Sky was the opening band and something happened with them, so Frank had to go out and do a warm-up set, which wasn't recorded. He never came back after the '76 performance, but played the surrounding areas."

While Travers himself didn't catch Zappa live in Erie, he did eventually get to see him on Frank's final tour in Cleveland in 1988. He packed the Zappa / Erie box set full of Erie memorabilia, featuring a book that includes images of the reel-to-reel tapes from the Erie shows, pictures of the concert posters, news articles, and even a signed picture of Frank Zappa from an Erie performance (The pic was discovered by Travers' mother at a local estate sale). There are many classic Zappa songs like "Wowie Zowie," "Don't Eat the Yellow Snow," "Dupree's Paradise," and "Muffin Man" played by three different Zappa bands. With the release of Zappa / Erie we now have the honor of being a part of the vast live catalog from one of the most interesting musicians from the last century.

Zappa / Erie is one of the few CD sets Larry Wheaton has purchased in recent memory, while his vinyl collection grows larger every week. He can be reached at wheaton1138@gmail.com.