A short story from William Todd 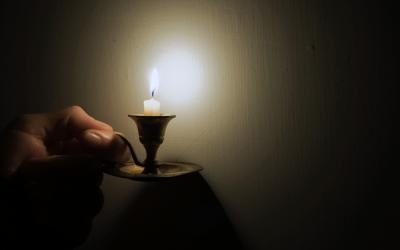 A cry from the other room woke the woman. She wiped a tangle of hair from her eyes with one hand while she nudged her husband with the other, who barely registered the interruption. "Did you hear that?" she asked. "Timothy, did you hear that noise?"

Smacking his lips sleepily, the man mumbled, "It's just Johnny. He'll go back to sleep." With that, he rolled over into a more comfortable position, taking most of the covers with him.

She pulled them back in irritation and began to readjust herself in the well-worn bed when there was another, louder cry. Pushing his back, she admonished, "Go check on him. I think he's having another nightmare."

That second cry now fully roused the man from his slumber. He rubbed her pumpkin-sized belly and said, "You two stay here. I'll get him settled back in."

"You're a dear," she said, kissing the back of his neck. She then readjusted herself, taking back her half of the warm sheets, while he maneuvered himself off the mattress with a protesting squeak.

The man lit a candle that was on his nightstand and staggered in a sleepy crawl down to the six-year-old's bedroom.

The door to Johnny's bedroom protested as his father opened it and entered. The boy was sitting up poker-straight in his bed with the threadbare covers pulled up over his head. There was a visible shake in the old, stained bedding.

The father noticed that the window on the opposite wall was open, letting in filaments of the cold October night. "Johnny, why on earth do you have the window open? You'll catch your death in this chill." Without waiting for a reply, he went to the window and looked out into the night. Fingers of fog strangled the nearer trees and hung in lazy clumps to the lower dales farther out near the tree line next to the graveyard. The full-moon glowed phosphorescently in the high, starlit night. The entire nightscape was one of an eerie, gothic composition that gave him goosebumps.

He shuddered briefly then shut the window and turned back to his son. "So, why did you cry out? Did you have a nightmare?"

A skinny, sheet-covered arm pointed down, as he gave a frightened whimper.

"Oh, so there's a monster under the bed, is that it?" his father asked, trying to hide a smile.

The covers shook vigorously in the affirmative.

With a sleepy grin, the father asked, "So, if I look under the bed to make sure no more monsters are there, then you'll go back to bed?"

The father went to the bed, got down on his hands and knees, placed the candle on the floor next to him, and cocked his head to see under the bed.

The shock of what he saw did not immediately register; he just knelt there in wide-eyed confusion at first, then suddenly his heart fluttered in stark terror. His son was shaking uncontrollably in that darkly-shadowed space.

When the boy's teary eyes met his father's, he whispered with dreadful fear, "Daddy, there's something in my bed!"

Suddenly, the man felt something cold and wet clamping around his neck, cutting off a scream.

This story originally appeared in local author William Todd's short story compilation Dead of Night. To learn more about Todd and his writing influences and style, visit eriereader.com for an online feature by Chloe Forbes.