J. Cole has come a long way from the cornier, flow-biting tricks of his early days. 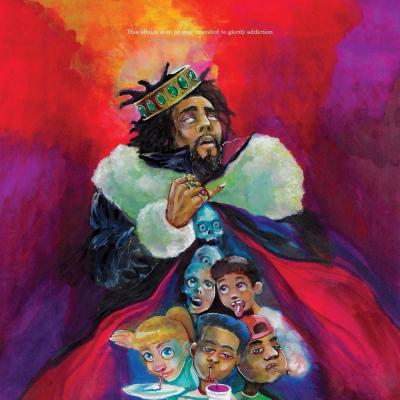 J. Cole has come a long way from the cornier, flow-biting tricks of his early days. No longer does the North Carolina-based rapper find it necessary to rely on one-liners about poop (or, at least not as much) to cut his more serious tracks. Rather, it seems that every project since 2014's Forest Hills Drive has been a significant improvement over the last, culminating with his latest experiment, KOD. Kids on Drugs? Kill Our Demons? King Overdosed? While it's been implied that the title could mean any of the preceding phrases, it reflects new lyrical ground for J. Cole and most of the time, it succeeds. Flush with organic beats, pitched-down vocals and spoken interludes, the biggest (and most common) strike against KOD is that, at its weakest, it plays like lighter amalgamation of Kendrick's last two LPs. But while Kendrick addresses drug use as a fact of low-income situations, J. Cole urges users to find another way out. Coming from someone who's made it to the top, it's a well-intentioned if at times condescending message, but one he delivers passionately. And while it may be silly to end this project with a diss track, there is more than enough here to applaud J. Cole for consistently putting his ambition first. — Aaron Mook

Thundercat // It Is What It Is

by Matt Swanseger4/6/2020, 2:00 PM
Pensive protagonist sorts through it with heart and humor

Tales Behind the Creative, Episode 3: DOMMY

by Symoné Crockett4/5/2020, 6:18 PM
Stay tuned as Symoné Crockett talks to the founder of Crew Life Productions as part of her ongoing live interview series

Tales Behind the Creative, Episode 2: Yeshuwa

The Ghost Club Releases "Isolation," Letting Fans Know They are Not Alone

Tales Behind the Creative, Episode 1: Jordy The Traveler