Liberty Park will once again be swept under a Texas flood of electric blues, a sound greatly indebted to Banta's idol, the late Stevie Ray Vaughan. 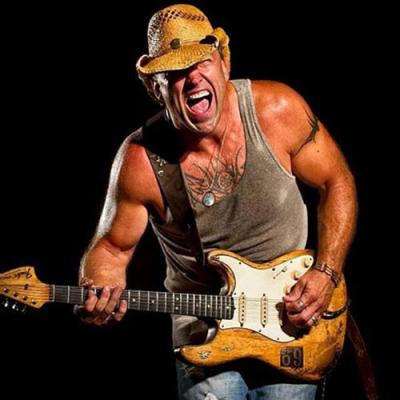 They may be Jake's Blues, but he's proven more than willing to share over the years. Jake Banta is less possessive than he is possessed with his guitar in hand. As a werewolf's transformation is triggered by the glint of the full moon, Banta's metamorphosis from soft-spoken farmer to swaggering showman is as simple as switching on an amplifier. He plays the guitar behind his neck, with a beer bottle, even with his teeth – he is a beast unburdened.

"Success to me is having a great night on stage, whether it's in front of 10 people or 10,000 people," Banta said in a 2011 interview with Dirty Dog Live Music TV. "If the music is right and things happen, the hair will stand up on the back of my neck and make me feel that special feeling, and that, to me, is what it's all about."

Liberty Park will once again be swept under a Texas flood of electric blues, a sound greatly indebted to Banta's idol, the late Stevie Ray Vaughan.

Jake's Blues is welcomed back to the 8 Great Tuesdays rotation every year, so it's safe to say that special feeling is mutual. Liberty Park will once again be swept under a Texas flood of electric blues, a sound greatly indebted to Banta's idol, the late Stevie Ray Vaughan. Although his sets will always contain their share of Vaughan covers, Banta's pride and joy is his original music. His home contains a small studio and he has recorded several of his own original albums, most recently 2013's Blisterin'. The Stevie Ray influence is undeniable, but Banta adds his own little twists to the blues-rock base, such as on the funky "We Came To Party," or the swinging, Gilligan's Island-inspired "Ginger or Maryann."

Choosing between Tuesday's show or Sunday's show at Schickalay's on the Bay should prove less difficult than deciding between beautiful fellow castaways – both events are free. It could come down to how well you like their friends – on Tuesday, Jake's Blues will be joined by the gruff, brass-infused blues sextet of Bill Toms and Hard Rain. On Sunday, they will team with Rodger Montgomery and Ron Yarosz and the Vehicle in what is sure to be a rowdy good time.

Not everyone deserves a second chance, but this is trouble you can afford to get into twice. – Matt Swanseger