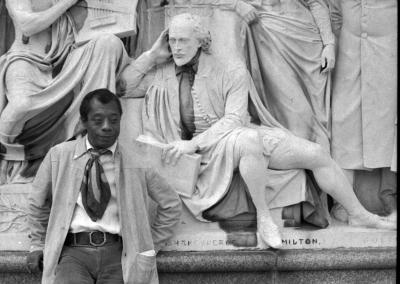 James Baldwin, author and intellectual icon of the Civil Rights era, is the subject of "Paperclips #2," an Erie Arts and Culture presentation featuring the 2016 documentary I Am Not Your Negro by filmmaker Raoul Peck (based on an unfinished autobiography by Baldwin) as well as Baldwin's classic work The Fire Next Time.

"Obscenity" is the first word I think of when I consider the title I Am Not Your Negro.

To anyone who knows the speech its title comes from, "Negro" is not the word James Baldwin uses. As if to underscore this fact, Samuel L. Jackson delivers voiceovers written by Baldwin himself in the unfinished text, "Remember This House," that serves as the departure point for the film.

Peck has said he chose the word "Negro" to avoid using a more inflammatory term that would overtake the message of the film. The whole work is a delicate dance between contrasting elements.

The film juxtaposes black and white footage from 1950s and '60s America with images from today's Black Lives Matter era. Splashes of color don't so much reward us as they underscore the timelessness and urgency of racism in America.

In fact, "Remember This House" was conceived by Baldwin in 1979 around the lives and deaths of three titans he had come to know as his friends: Medgar Evers (assassinated in 1963), Malcolm X (killed in 1965), and Martin Luther King, Jr. (murdered in 1968). However, Baldwin never got more than 30 pages into this story because, according to Peck, it was too painful to finish telling.

A Black gay author and human rights advocate with roots firmly in the Black church, James Baldwin (1924-1987) spent much of the 1950s in European exile. His decision in 1957 — that he could no longer stand on the sidelines of the Civil Rights movement — motivated his return to America and gave him a clear sense of purpose. His contributions to the cause earned him one of the largest FBI files collected by J. Edgar Hoover (no stranger to personal secrets himself).

Few other works in modern history can be deemed as prophetic as the 1963 collection of Baldwin's essays known as The Fire Next Time. Baldwin predicts the destructive shape and character of the 1960s, Nostradamus be damned.

The Fire Next Time begins with a sermon on survival. It is ultimately a eulogy to the oppressed state of mind along with a baptism into the thinking of a Nation of a people seeking liberation. The work is confessional in a way no demagogue could ever risk. Speaking to both God and Humanity, it owes nothing to Nietzsche. Beyond asserting the dignity of African Americans, it presupposes that dignity.

Filmmaker Raoul Peck recalls that upon reading this collection at the age of 18, the book gave him the first sense that there was "a larger world and that he himself was first and foremost a human being."

It seems as if every 50 years or so, white America experiences an existential crisis and decides to exorcise its demons on Black America. From the Civil War and the formation of the Ku Klux Klan in the 1860s, we advanced to the film Birth of a Nation and the second Ku Klux Klan in 1915 with its "America First" movement. In the 1950s and '60s as a reaction to the Civil Rights movement, the Ku Klux Klan took on new forms to keep Blacks "in their place".

As Black men were forced onto the front lines of the Vietnam War, there were riots in hundreds of American municipalities. Over 110 cities burned in America on the day Martin Luther King Jr. was assassinated.

We are again in such a sour spot now.

President-Elect Joe Biden beat President Trump by 7 million votes, yet Trump's base seems to clamor for civil war, the destruction of democracy, and the installment of a standing dictatorship.

Trumpian leaders have co-opted the language of the oppressed to keep rage pointed away from creating real change. Blame the Blacks, Jews, Mexicans, the indigenous, immigrants, the Saracens, the gays, and women. It's almost disappointing they couldn't just invent some new form of hate.

What does James Baldwin say to these times?

I don't know what you find obscene, but for me it is hate. I consider this a vaccination against hate. I find the book and film to be beautiful works and hope The Fire Next Time can be inside our hearts and minds with love and justice proving hate has no home here.

Please join Hayes Moses and myself for "Paperclips #2" by registering online at Erie Arts and Culture's website (erieartsandculture.org). The Zoom meeting is free and will be held Friday evenings from 6 to 7:30 p.m. on Jan. 22 and 29, and Feb. 5 and 12. We will have special guests and are looking to have as broad a conversation as possible.