A sharp, high-energy sound that is exciting but sometimes jarring. 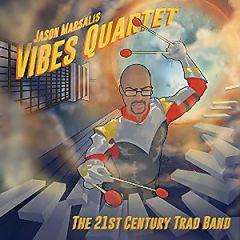 In separate interviews with this writer, Wynton and Branford Marsalis each made a point of saying "wait 'til you hear Jason," their younger brother. Well, with The 21st Century Trad Band, Jason's second well-received CD (the first hit No. 1, the new one is at No. 7 on the jazzweek.com radio-play chart) the younger sibling seems to be living up to his brothers' bragging. Jason began his career on drums before switching to vibraphone, on which he has become a skilled player, composer (all 12 songs here), and leader. On vibes, he has a sharp, high-energy sound that is exciting but sometimes jarring. A full-fledged mallet man, here he also plays a little marimba, xylophone, glockenspiel, and tubular bells. Jason leads an excellent band, ensemble and solo-wise, and with few exceptions, they shine on a creatively varied repertoire, ranging from interludes to extensive workouts, modern to old-timey, intense to downright cheerful, and hard-swinging to gentle (even pretty).   – Bob Protzman

If Fall Out Boy wants to save rock 'n' roll, this is not the way to do it. This latest variant of the pop-punk mega-band seems to have embraced the pop and jettisoned the punk. Bands evolve over time, but there are so few real rockers with true star power influencing today's Top 40-listening teeny boppers, that it is tragic when one of them sells out and becomes just another commercial dance band. This album is radio-friendly: The anthem "Centuries" has inundated the airwaves. No one will argue that singer Patrick Stump can't belt out a tune with the best of them. And good Lord, does this collection have catchy hooks. The infectious "Uma Thurman" turns the theme song of TV's The Munsters into a groovy, must-dance earworm. Gone, though, are the crunchy, driving guitars and capricious drum-kit work. And I miss them. Upon hearing this denouncement of her favorite band, the biggest FOB fan in my house berated me mockingly: "This isn't your music. You don't understand. They aren't your generation." Perhaps she's right. Maybe I'm just too old to appreciate Fall Out Boy's new, updated sound. – Bryan Toy