Jaime Kinder of Meadville and Dwan B. Walker of Aliquippa on "Fixing Where We Rest Our Heads" 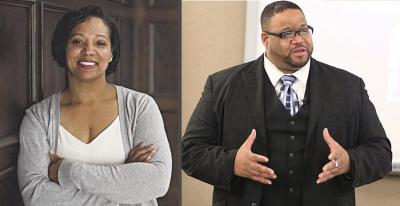 In a candid conversation, two African American mayors from western Pennsylvania will talk about the unique paths they are on and the towns that they lead. Mayor Jaime Kinder of Meadville and Mayor Dwan B. Walker of Aliquippa will be the special guests for a moderated yet frank discussion on the struggles and triumphs they've experienced as historically marginalized members of the community rising up to oversee their hometowns.

The Jefferson Educational Society, at their satellite East Erie location at the Erie Center for Arts & Technology (ECAT) will host the free event.

Kinder was elected Mayor of Meadville, PA in November 2021. The city's first female mayor, she presides over the county seat and largest city in nearby Crawford County. Kinder is a small business owner and graduate of Edinboro University (now known as PennWest Edinboro).

Two counties south, in Beaver County, you'll find the city of Aliquippa, also the most populated in its respective county. For 12 years, Dwan B. Walker has served as the city's mayor. Walker was the first African American elected mayor in Aliquippa ever, and the second in Beaver County. Walker is a father of two, a lifelong resident of the city, and a graduate of Robert Morris University. He has been the recipient of numerous awards, such as the Dr. Martin Luther King Jr. "Coordinator Award," Dignity and Respect champion award, The Jefferson Award for Community Service, The 50 Men of Excellence Award, The Black History Achievement Award, and The Dare To Dream Award.

A catered reception is scheduled to follow the discussion.

"Fixing Where We Rest Our Heads": A Candid Conversation with Two African American PA Mayors on the Personal & Political